Year of the Bow Tie 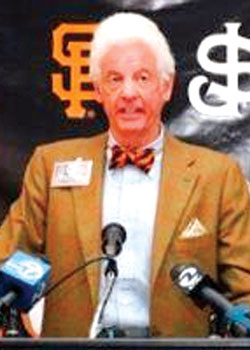 For those who wondered how former ABA President William H. Neukom (2007-08) was keeping himself occupied, it must have come as a shock to see his trademark white mane and bow tie sitting just behind the San Francisco Giants dugout during the World Series.

Neukom, who launched the World Justice Project during his term, now heads the ownership group for the Giants and, by any measure, has done a bang-up job. It was Neukom who accepted the trophy after the Giants bested the Texas Rangers for the team’s first World Series in 56 years.

Even his style seems to have rubbed off, as evidenced by the team’s free-spirited pitcher, the long-haired Tim Lincecum, who showed up for the final game wearing a white-collared shirt, a blue blazer and, … yes, a bow tie.