Before they were buzzwords, Luz Herrera was a pioneer in the world of "low bono" practice, nonprofit law firms and legal incubators. All three innovations have blossomed and spread across the country since then.


For instance, the ABA Standing Committee on the Delivery of Legal Services reports there are over 60 established or planned legal incubators across 33 states and four countries. Meanwhile, according to Open Legal Services, 29 nonprofit law firms have been created in the last five years—compared with eight firms before 2014. And of those eight firms, only three predate 2004.

“What I’ve really been excited about is how new graduates have taken to it,” says Herrera, a professor and associate dean at Texas A&M University School of Law in Fort Worth. “We’ve had a lot of organizations that have sprung up developing nonprofits to see how the low-bono work can be subsidized.”

The ABA Journal honored Herrera as a Legal Rebel in 2009 because of her pioneering work in low bono, which helps address the justice gap by charging fees that low- and middle-income clients can afford. For more than six years, she ran a low-bono solo practice in Compton, California, and later went on to found a nonprofit that helped lawyers serve the same demographic. Next, as a law professor at Thomas Jefferson School of Law in San Diego, she helped run a legal incubator that taught how to make it with a low-bono practice.

Herrera’s work has taken her across the country too. She left Thomas Jefferson for a one-year special project at the University of California, Irvine School of Law, working at a consumer law clinic that was helping then-California Attorney General Kamala Harris monitor banks’ compliance with the national mortgage settlement. Herrera then became an assistant dean at the University of California, Los Angeles School of Law, where she supervised clinical education, experiential learning and public service programs. At first, she balked at the idea of moving to Texas after getting a call from Texas A&M, but after a visit and some convincing, she was sold.

“We love being part of developing a new law school,” she says, noting that she’s associate dean of experiential education, overseeing clinics, externships and simulation courses. “It’s the hands-on training students get to become lawyers.”

Attorneys who choose to serve low- and middle-income people won’t make the six-figure salaries of associates at big law firms. Then again, a very small percentage of law grads land those top jobs anyways, Herrera says. Instead, a low-bono practice enables a lawyer to balance the desire to help people with making a living.

“It’s not necessarily going to be able to generate tons of money,” she says. “It was the satisfaction I received, the relationships I built—I was able to figure out how to make a living and live a reasonable life.” 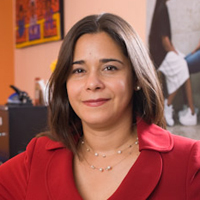 Luz Herrera is a professor and associate dean at Texas A&M University School of Law. For more than six years, she ran a low-bono solo practice in Compton, California, and later went on to found a nonprofit that helped lawyers serve the same demographic.