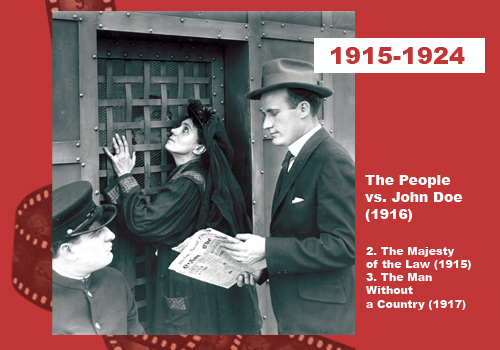 1. The People vs. John Doe (1916), directed by Lois Weber, reflects high-profile murder cases in that era. It was described as “a terrific indictment of a system that permits a man to be convicted and sentenced to death on purely circumstantial evidence” by the New York Times.

“In a time that celebrated D.W. Griffith’s racist epic Birth of a Nation, director Lois Weber focused on a much smaller story about injustice and the death penalty. Based in part on the story of Charles Stielow, wrongly convicted in New York of murdering his neighbor, Weber dramatizes the helplessness of a slow-witted man before the ritualized milieu of the law.” —Allen Pusey

“The People vs. John Doe is the prototype of the classic legal drama.” —Taunya Lovell Banks

“I would rank most highly the two films by Lois Weber, an underrated woman director who made interesting films about serious and controversial subjects.” —Diane Waldman