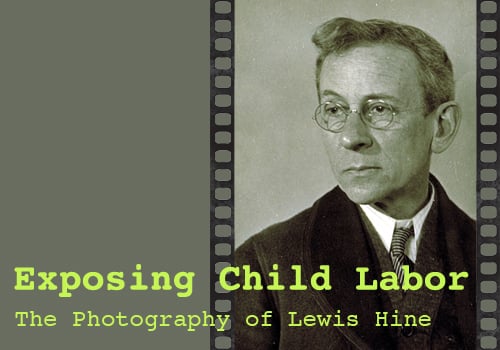 Lewis Wickes Hine (1874-1940) was a teacher in New York before he became interested in photography, particularly as a means to advocate for social change. In 1908, he left his teaching position to work for the National Child Labor Committee as an investigator and photographer. From 1908 to 1924, he traveled the country, taking more than 5,100 photographs for the NCLC.

“Often hiding his camera and tricking his way past bosses, Hine even learned to write with his hand inside his pocket in order to get accurate captions without giving himself away,” according to the NCLC website. “His work—famously never touched up for effect—depicting children laboring in sweatshops, coal mines, textile mills, and on farms outraged the public and shamed the government into acting. His photographs provided the NCLC with the leverage it needed to advance the enactment of state and federal laws to protect the rights of children in the workplace, including the Fair Labor Standards Act of 1938, which was the first major federal child labor law ever enacted.”

The following photos and captions (written by Hine himself) are from the Library of Congress’ collection of Hine’s work for the NCLC.

Attribution: Self-portrait by Lewis Hine, courtesy of the Library of Congress. Gallery compiled by Lee Rawles.