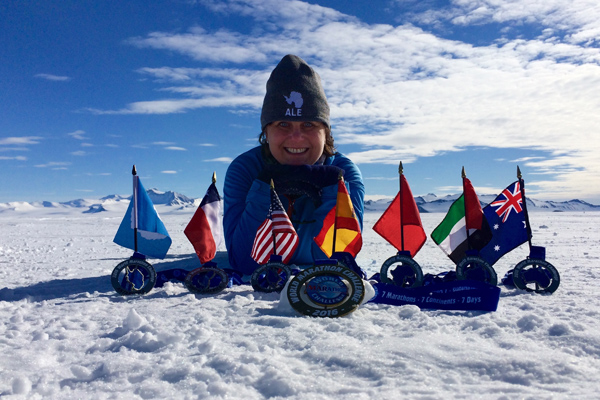 Sarah Ames has always loved to travel. Through her work representing companies based in German-speaking countries, the German-born business transactions lawyer travels to Europe at least three times a year. But she also travels extensively for fun, and many of her international adventures include running marathons. In 2007, she became a member of the Seven Continents Club, an exclusive group of runners who have logged 26.2 miles in certified races on every continent. She has since repeated the series four times, occasionally returning to the same race again, including the North Pole Marathon, billed as the only certified marathon run entirely on ice. “It’s an interesting way to meet new people, and I find it relaxing,” she says. “Trips like these may not seem relaxing, but they help you see how things can be done differently—you think, ‘I am at the end of my rope,’ but you can still keep going—and you learn a lot of different skills while traveling and running, like how to stay strong mentally.”

Ames’ approach to running could be called “adventure-thoning”—combining a marathon with another outdoor experience. After a race in Zimbabwe, she traveled to Zambia to volunteer at a lion camp. Following a race in Singapore, she spent five days tracking orangutans in Indonesia. Not that the marathons themselves are not scenic: Ames has run past stone statues on Easter Island, alongside penguins in Antarctica and through the verdant highlands of Scotland. Even running through a city like Sydney reveals details she says she would have missed had she simply strolled through the streets as a tourist. A marathon in Ethiopia even inspired her to become a board member, volunteer and fundraiser for the Hamlin Fistula Hospital in Addis Ababa, which provides free surgeries for women with gruesome birth injuries.

This year, she completed what many consider the ultimate endurance test, the World Marathon Challenge. Participants run seven marathons on seven continents in seven days. One of her favorite parts was a night run in Marrakech—the second marathon in less than 24 hours—where she watched the sun rise over the ancient city walls. Although Ames admits the experience was grueling, she’s already surfing the internet for her next challenge. She’s been eyeing the London Marathon but, ultimately, she says, “I’ll just have to see what inspires me.”