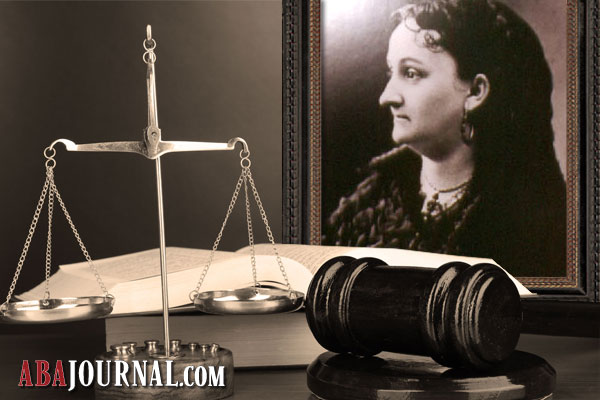 Image from the Chicago Bar Association.

Myra Bradwell took and passed the 1869 Chicago bar exam two months after Belle Mansfield had been accepted by the Iowa state bar. Bradwell, the wife of a Chicago judge, had launched the law journal Chicago Legal News the previous year. It gained success almost immediately.

After being examined and recommended for admittance to the bar, Myra petitioned the Illinois Supreme Court using the same legal argument which had been successful for Belle Mansfield in Iowa. However, she was turned away on the grounds that as a married woman she would not be bound by contracts, “being under a legal disability in that regard.”

Her appeal to the Supreme Court was unsuccessful, with seven of eight justices announcing in 1873 that “the natural and proper timidity and delicacy which belongs to the female sex evidently unfits it for many of the occupations of civil life.”

Myra continued on as the editor and publisher of the Chicago Legal News, and served as a strong advocate for women’s suffrage. In 1890, the Illinois Supreme Court finally admitted her to practice law, on its own motion. Although she was also admitted to practice before the U.S. Supreme Court in 1892, she never did so. She died in 1894.