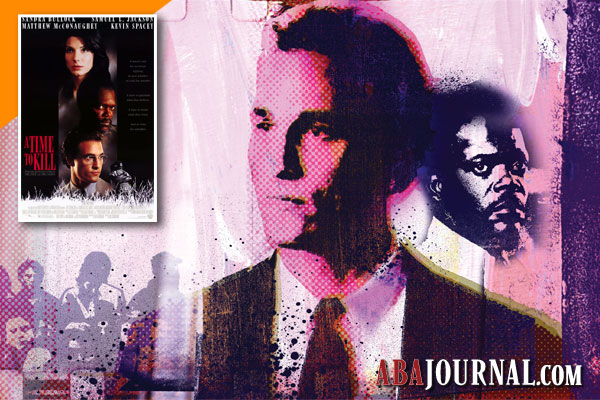 Based on John Grisham’s first novel, A Time to Kill stars Samuel Jackson as Carl Lee Hailey, an African-American man accused of murder after killing two white racists who brutally raped and attempted to hang his 10-year-old daughter. The setting is Clanton, Mississippi, a town plagued by racism and run by the Ku Klux Klan. The recent acquittal of four white men for a similar cross-racial crime leads Hailey to believe he needs to take justice into his own hands. Throughout the capital trial, Hailey’s defense attorney, Jake Brigance, played by a young Matthew McConaughey, faces opposition and intimidation from the KKK, including a cross burning on his lawn and an attempt to bomb his home.

Scene: In his closing argument, Brigance instructs the jurors to close their eyes while he tells them about a little girl. He describes, in heart-wrenching detail, the attack on Hailey’s daughter. By the end, he is close to tears. “Can you see her?” he asks the jury. “I want you to picture that little girl.” Then he tells them: “Now imagine she’s white.”

Lesson for lawyers: When we learn legal doctrine, we assume it will be applied neutrally, without regard to race, gender, sexual orientation, hair color, height or any other individual characteristics of the parties involved. However, law is not applied by a computer, but by jurors whose decisions can be affected by prevailing cultural and social norms. By asking jurors to imagine the victim as white, Brigance gets them to connect to her—and to her father’s response to the attack—in a way they otherwise could not, given the culture in which they were raised. In doing so, he appeals to their intuitive sense of justice.