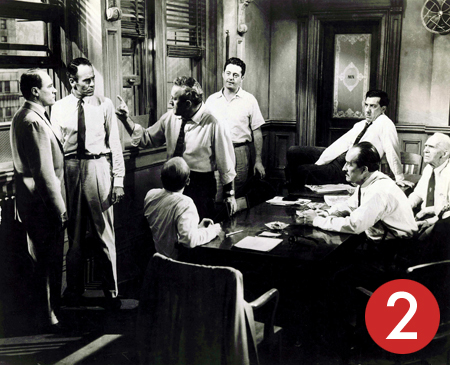 Henry Fonda produced and starred in this faithful adaptation of Reginald Rose’s critically acclaimed stage play chron­icling the hostile deliberations of a jury in a death pen­alty case. A lone juror (Fonda) expresses his doubts about what seems at first an open-and-shut prosecution.

What tumbles out of the ensuing dis­cussion is a gut-wrenching examination of the prej­udices, prejudgments and personal psychological baggage these assembled citizens have brought to a life-or-death debate over the fate of the young Puerto Rican defendant.

Based on Rose’s own experience as a juror in a manslaughter trial, the play was first adapted for TV by Sidney Lumet, who went on to direct the movie version, his first feature film.

Trivia: Lost all three Oscar nominations to The Bridge on the River Kwai.