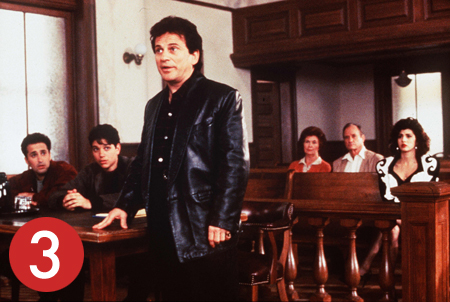 Vincent “Vinny” Gambini (Joe Pesci) is a brash Brooklyn lawyer who only recently managed to pass the bar exam on his sixth try. He’s representing his cousin and a friend—two California-bound college students who are arrested for capital murder after a short stop at a convenience store in rural Alabama. Still, the rule of law prevails in the courtroom of Judge Chamberlain Haller (Fred Gwynne).

The movie packs in cinema’s briefest opening argument (“Everything that guy just said is bullshit.”), its best-ever introduction to the rules of criminal procedure, and a case that hinges on properly introduced expert tes­timony regarding tire marks left by a 1964 Skylark and the optimal boiling time of grits.