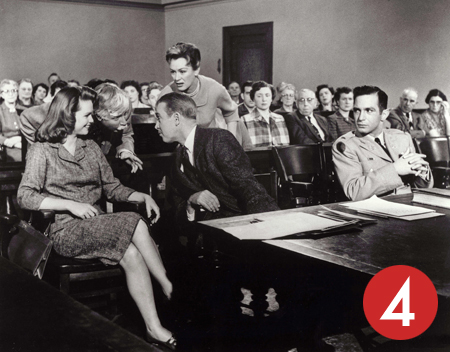 Otto Preminger directs this realistic study of an Army lieutenant accused of murdering a bartender who allegedly raped his coquettish wife. An A-list cast is headed by James Stewart as the defense attorney, George C. Scott as prosecutor, Ben Gazzara as the de­fendant and Lee Remick as his wife.

The surprise, though, is the stupendous performance in the role of the judge by real-life lawyer Joseph Welch, who represented the Army in the McCarthy hearings. The plot skips nimbly through a thicket of ethical dilemmas involved in representing a murder defendant.

It was inspired by an actual case and adapted from a novel written by a Michigan supreme court judge. The original score is by Duke Ellington, who makes a cameo.