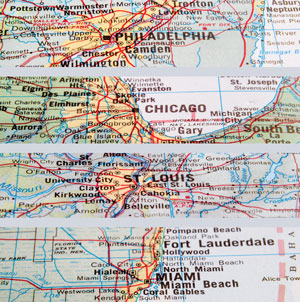 The ABA Section of Litigation is hitting the road. The journey may lack the romantic flair of Jack Kerouac's 1957 classic On the Road or the poignancy of John Steinbeck's The Grapes of Wrath from 1939, but on a practical level it will provide a path for judges and lawyers around the United States to better understand a series of significant amendments to the Federal Rules of Civil Procedure.

The amendments cover a wide range of topics in the rules, but the key changes seek to incorporate the concept of proportionality to the discovery process; foster greater cooperation among litigants in accordance with the statement in Rule 1 that the rules are intended “to secure the just, speedy and inexpensive determination of every action and proceeding”; and encourage earlier and active case management by judges. The amendments also add a new rule to address the preservation and loss of electronically stored information.

The amended rules are scheduled to go into effect on Dec. 1. After they were drafted by the Advisory Committee on the Federal Rules of Civil Procedure and circulated for comment, they were approved without dissent by the Judicial Conference of the United States and the Supreme Court. Although Congress has the authority to disapprove the amendments, it was not expected to do so.

And that’s why the Litigation Section is hitting the road, along with the Duke Law Center for Judicial Studies. The two entities are co-sponsoring a series of live programs in 13 cities under the official title “Reinventing Case Management and Discovery Under the 2015 Civil Rules Amendments.” But the informal title—“Civil Rules Amendments Roadshow”—perhaps better captures the spirit of the undertaking.

At each stop, a panel of judges and litigators will offer an overview of the amendments and discuss with audience members how to apply them to actual cases. Each program will be three hours. The moderators for all the programs will be Judge Lee H. Rosenthal of the U.S. District Court for the Southern District of Texas in Houston, and a past chair of the U.S. Judicial Conference Advisory Committee on Rules of Practice and Procedure; and Steven S. Gensler, a professor and associate dean at the University of Oklahoma College of Law in Norman, and a past member of the conference’s Advisory Committee on Civil Rules.

The planners are forgoing electronic or Internet-based delivery methods to present the programs the old-fashioned way: live and in person. And there is a good reason for that approach, says Michele D. Hangley, who has been involved in planning the roadshow as a co-chair of the Litigation Section’s Duke Law Project. (The other co-chair is Beth L. Kaufman, a partner at Schoeman Updike Kaufman & Stern in New York City.)

The give-and-take aspect of the programs will be crucial to their success, says Hangley, a shareholder at Hangley Aronchick Segal Pudlin & Schiller in Philadelphia. “There is nothing better than being in the same room with great national and local speakers,” she says. “It’ll be a discussion, not a lecture—lively, even heated—and a good chance to ask questions.”

Gensler says having the same moderators for all the programs (he’ll miss one of them) will help facilitate the open discussions among participants. “The real point of the programs—and their real value—is to start a dialogue between local judges and local lawyers on both sides of the ‘v’ about how the proposed new rules can be used to their best effect and in a way that is fair to everyone.”

Gensler and other experts familiar with the amendments emphasize that each local jurisdiction will likely interpret and apply them in its own way. “There’s no one-size-fits-all approach,” he says. “The local programs give lawyers and judges a chance to think about practices and solutions that make the most sense for them in light of local conditions and culture.”

An example of this approach is how the amended rules treat proportionality in the discovery process. Proportionality embodies the concept that discovery should produce the information necessary for a litigant to prove his or her case without excessive demands for documents, extensive interrogatories, resistance to legitimate discovery requests and other tactics that bring the process to a crawl while creating unnecessary work.

Proportionality is not a new concept to the Federal Rules of Civil Procedure, says John Rabiej, the director of the Duke Law Center for Judicial Studies who previously headed the staff office for the Judicial Conference’s rules committee. Proportionality was incorporated in amendments to the rules that went into effect in 1983 and 2006, but it was not always a concept that lawyers took to heart. But now, Rabiej says, “proportionality is front and center, and you can’t avoid it.”

The stronger emphasis on proportionality may come as a bit of a surprise to some practitioners. “In the near term, the em-phasis on proportionality will be the most confounding to plaintiffs’ counsel, largely because it is perceived as a new restriction on the bounds of discovery,” says Elizabeth J. Cabraser, a partner at Lieff Cabraser Heimann & Bernstein in San Francisco. “This is an unfortunate perception, but it will be overcome as plaintiffs’ counsel learn that proportionality is also a protection of the right to insist on, and obtain, the information, evidence and testimony that they need. It does put a premium on planning—but that is the point of the pretrial process anyway.”

The idea for holding a series of live programs about the amendments came about casually from conversations between Rabiej and Laurence F. Pulgram from the Litigation Section during a conference sponsored by Duke in 2014 to discuss how to best implement the amendments. Pulgram, a partner at Fenwick & West in San Francisco who chairs the firm’s commercial litigation group, is currently chair-elect of the section. The roadshow idea made sense to both of them. “We wanted to engage people who will be using the amended rules right from the start,” Pulgram says.

Federal judges and their law clerks may attend a program free of charge. The fee for Litigation Section members and alumni of Duke law school is $60, and government and public service lawyers will be charged $25. The fee is $100 for all other attendees. CLE credit has been applied for.

Rabiej and Pulgram are confident that the roadshow programs will play an important role in helping lawyers and judges understand and apply the latest round of amendments to the Federal Rules. “We wouldn’t do it unless we thought it was important,” Rabiej says.

This article originally appeared in the December 2015 issue of the ABA Journal with this headline: “Rules on the Road: 13-city roadshow highlights changes to the Federal Rules of Civil Procedure.”