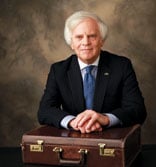 A seminal blueprint for the rule of law is the Magna Carta, signed by England’s King John on June 15, 1215. To mark the Great Charter’s 800th anniversary next year, the American Bar Association is embarking on a variety of projects and activities to herald, honor and celebrate this landmark, lasting achievement of civil society.

In a riverside meadow 20 miles west of London, barons compelled King John to consent to a series of rights and liberties they presented in the Magna Carta. The landowners sought freedom from tyranny by asserting that no one is above the law, not even the king.

The barons demanded safeguards for their right to life, liberty and property against the arbitrary actions of a monarch. The Magna Carta paved the way for core legal principles such as due process of law, habeas corpus, trial by jury and the right to a speedy trial. The document presented a template for a higher law that could not be changed by executive mandate or legislative acts. America’s founders embraced this concept of “the law of the land” in the supremacy clause of the U.S. Constitution.

The barons, who represented the interests of the landed gentry, were hardly democratic or populist by the standards of today’s diverse society. Still, the Magna Carta had a profound, evolving effect on law and justice in Great Britain, the United States and other countries.

In 1957, ABA members honored the Magna Carta and its foundation for the rule of law by funding the creation of a monument at Runnymede, the pastoral district along the River Thames where King John met with the barons and affixed his seal to the document. This classical Greek structure still stands but needs repairs. As part of the Magna Carta 800-year celebration, the ABA is seeking donations to refurbish and rededicate this beautiful memorial.

The ABA’s Magna Carta Anniversary Committee, chaired by former ABA President Stephen Zack, is overseeing many other exciting plans for the coming year. For Law Day in May 2015, the ABA is developing Magna Carta resources to help bar associations, courts, civic groups and others conduct educational and commemorative activities. Leading up to Law Day, groups throughout the ABA and bar community are being encouraged to hold Magna Carta-themed writing competitions and other programs. The ABA is also partnering with the National History Day organization’s national essay contest on a special ABA Magna Carta Prize.

The ABA Standing Committee on the Law Library of Congress is working with the library to develop a traveling exhibit that will complement the library’s upcoming Magna Carta exhibition. After its launch at the 2014 annual meeting in Boston, the exhibit will be sent across the country to law schools, courthouses, public libraries and other venues through 2015 and beyond.

The ABA will also produce—in partnership with a British publisher—a coffee-table volume, Magna Carta: The Foundation of Freedom 1215-2015. This keepsake publication joins a forthcoming ABA book, Magna Carta and the Rule of Law, which highlights the important contributions the charter has made to the rule of law and constitutionalism.

The ABA’s Magna Carta celebration will culminate June 11-14, 2015, at historic sites in London and Runnymede. Pre-eminent speakers will present continuing legal education programs and lead commemorative events, focusing on the principles and influence of the Great Charter. These activities will be hosted by my successor as the association’s president, William Hubbard, and by former ABA President Tommy Wells, who chairs the ABA London Sessions Planning Committee.

The ABA welcomes you to support and participate in this once-in-a-lifetime celebration. Together, we will honor the great charter of rights and liberties that serves as the world’s most enduring symbol of the rule of law.

ABA Journal: “2 books to commemorate 800 years of the Magna Carta”

This article originally appeared in the June 2014 issue of the ABA Journal with this headline: “The Great Charter: 800th anniversary will be heraled with celebrations of the rule of law.”