A Big Tent Goes Up 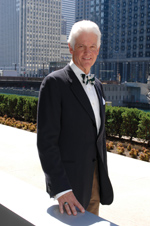 When incoming ABA president William H. Neukom explains his plans for the coming year, he likes to use the imagery of tents and tables.

“We can learn more and accomplish more when we erect a big tent and fill it with round tables for informed deliberation—when we create an environment in which ideas and contributions are judged on their merits,” said Neukom in his address to the ABA House of Delegates a year ago after his formal selection as president-elect.

He starts his one-year term as president in mid-August at the close of the association’s 2007 annual meeting in San Francisco. Neukom plans to use a pretty big tent and a lot of tables for the initiative at the heart of his presidential agenda.

As the name implies, the World Justice Project is an ambitious undertaking. Its goal is to identify and measure how the rule of law can be a tool for creating what Neukom describes as communities of economic opportunity and social equity.

But achieving those goals is beyond the reach of just the legal profession, says Neukom. That’s where the big tent and the round tables come in.

“The best way to look at issues and opportunities is to invite a broad array of perspectives on those issues,” says Neukom of Seattle. “The rule of law is not the rule of lawyers and judges. All elements of society are stakeholders in the rule of law.”

For that reason, Neukom envisions the World Justice Project as an effort involving representatives of many disciplines as well as many nations.

Efforts to draw in other fields already are under way, along with other elements of the project, which is building on previous efforts by the ABA to address rule of law issues.

The ABA sponsored major gatherings in 2005 and 2006 that began to articulate the relationship between the rule of law and other issues of concern to societies around the world, including corruption, education, racial and gender equality, health and medical care, business development, and poverty. Those discussions produced a series of recommendations on rule of law issues that will be considered by the House of Delegates in San Francisco.

After the symposium in September 2006 (co-sponsored by the International Bar Association), ABA leaders met in February with representatives of other fields to discuss their common concerns about issues related to the rule of law.

It was a productive gathering, says attendee Michael Sanio, director of international alliances for the Ameri­can Society of Civil Engineers. A committee of the society was scheduled to meet in July to consider signing on formally to the World Justice Project. Sanio says the ASCE already was concerned about the ramifications of bribery and fraud in the engi­neering industry. Engineering is a $5 trillion annual industry—a tenth of the world’s total gross domestic product—says Sanio, but the industry loses up to $500 billion every year to bribery, fraud and corruption.

The ASCE initiated a project three years ago to address the problem. But Sanio says that “it’s not an issue the engineering profession can work on alone. More broadly, from the perspective of doing the right thing, we can do a lot more working in partnership with other groups. And that will help us be more effective in building the world’s infrastructure.”

Similar multidisciplinary meetings will be held in Europe, Asia, Africa and South America. In addition, a number of meetings are being sponsored by bar associations in various U.S. states.

On a related front, a team of academic researchers has begun preparing a series of papers analyzing the relationship between the rule of law and other aspects of society. The research team, which includes two Nobel Prize winners, is coordinated by the American Bar Foundation, the ABA’s research affiliate. The team is headed up by Nobel laureate James Heckman, an economics professor at the University of Chicago and a senior research fellow at the foundation. Team member Amartya Sen, a professor of economics and philosophy at Harvard University, also won the Nobel Prize.

Perhaps the most innovative element of the World Justice Project is the rule of law index, an attempt to create a practical way to measure the extent to which individual countries adhere to rule of law principles.

The notion of measuring how well governments in various countries incorporate elements of law into their policies is not a new one, says Mark D. Agrast of Washington, D.C., who is coordinating preliminary work on development of the ABA’s rule of law index. For reference purposes, a list of at least 60 such projects—a few of them conducted by the ABA—has been compiled, he says.

But a crucial difference is that those assessments only accounted for some elements of the rule of law, while the index being developed will specifically measure adherence to rule of law principles, says Agrast. But to do that successfully, he says, the rule of law must be defined with a clarity that it hasn’t had before.

“A lot of people use the term rule of law, sometimes very loosely,” says Agrast. “If the index concept is to be truly useful as a comparative tool, the rule of law needs to be rigorously defined, and a method of measuring it needs to be developed.”

Agrast says it is also important to test the “assumption that the rule of law is an indispensable component of social advancement in other forms. That is something that should be tested in an empirical way.”

As a starting point, the project posits that the rule of law encompasses four universal principles: a system of self-government subordinate to the citizenry; a system based on fair, public, understandable and resilient laws; a robust and accessible legal process providing the framework for transactions and dispute resolution; and diverse, competent and independent lawyers and judges.

Development work on the rule of law index is under way. Version 1.0—remember, Neukom was an executive at Microsoft for 17 years—should be ready in time for field testing this fall in five countries, which have not yet been selected.

Neukom acknowledges that asking countries to consent to having their adherence to rule of law principles measured won’t always be an easy sell.

“We won’t always be greeted with open arms by a host government,” he says. “But this shouldn’t be seen as an effort to impose Western values. We’re talking about universal values.”

The proof of that assertion is that project planners consider the United States fair game for study along with other nations.

“Sadly, one of the communities that would benefit most from a fair evaluation against a set of objective factors is our own country,” said Neukom in his speech last year to the House of Delegates. “We do not measure up well against some of the principles. Too many of our laws smack of special interests. Our legal process is literally inaccessible to some 40 million Americans. Our profession does not yet reflect the rich diversity of the people of this country. And there is brewing a dangerous storm of antipathy toward the judiciary. While we have much to offer to developing countries, we have much to do in our own backyard.”

Outgoing ABA President Karen J. Mathis of Denver agrees that the rule of law must be addressed as a domestic issue, not just a matter of international concern.

Mathis notes that during the past year, international was removed from the title of the ABA Center for Rule of Law Initiatives. It was a gesture with meaning, she says. The international designation “suggests the issues only exist overseas, but they’re here in the U.S. as well,” she says. “We need to look at the rule of law internally as well as externally.”

The various pieces of the project will come together next summer, when Neukom convenes a three-day World Justice Forum, tentatively scheduled for Vienna, Austria. The forum will have a multinational and multidisciplinary invitation list and planners anticipate between 500 and 700 attendees. The final version 3.0 of the rule of law index is slated to be released at the forum, which Neukom says will also serve as an incubator for other follow-up efforts and new programs to advance the rule of law.

In March, the Bill & Melinda Gates Foundation announced that it was awarding a $1.75 million grant to support the ABA’s World Justice Project. As of early July, discussions were under way with at least two other major foundations interested in supporting the project.

That kind of support for the project is “important beyond the dollars,” Neukom says. “The imprimatur of these venerable institutions gives credibility in the marketplace of money and ideas.”

Neukom and Mathis say U.S. lawyers should recognize their own stake in rule of law issues.