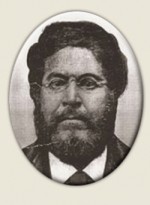 One hundred-sixty-three years is a long time to wait for a court decision. But for the family of George B. Vashon, a century and a half beats never at all.

In May the Supreme Court of Pennsylvania admitted Vashon to the state bar. It was a posthumous admission that his family had been waiting for since 1847, when Vashon was denied admission to the bar.

When Vashon first applied for admission to practice law before the Allegheny County bar, his qualifications were not in doubt. He had graduated from Oberlin College with both a bachelor’s and a master’s degree and had clerked for Allegheny County Judge Walter Forward before applying for admission to the bar. He had studied Greek, Latin and even Sanskrit. Vashon, who grew up in a Pennsylvania home that was used as a station in the Underground Railroad, also was active in anti-slavery efforts.

But back in 1847, the Pennsylvania bar refused to consider his application for admission to practice because he was black. According to research by his great grandson Nolan N. Atkinson Jr., a partner with Duane Morris in Philadelphia, Vashon was the son of a black man and a mixed-race woman.

Vashon applied for admission to the bar in Pennsylvania a second time and was denied again in 1868. He died in 1878 from yellow fever without ever being admitted to practice in Pennsylvania.

Outrage over the discrimination had been not much more than a family affair until Pittsburgh attorney Wendell G. Freeland read about Vashon in a Pennsylvania Bar Association magazine. Freeland, a former Tuskegee Airman during World War II who has been arrested twice for civil rights-related protests, was moved by what he read.

“I suggested that the court should do something, and they came back with what I considered an asinine response,” he says. Freeland says the court told him that it was hesitant to hear Vashon’s case and rule on it because it didn’t want to establish a precedent. (In a civil rights coincidence, Freeland completed the initial paperwork to file the case on Martin Luther King Jr. Day.)

The response prompted Freeland to start communicating with Vashon’s family about correcting the injustice, and in January 2009 he filed the paperwork to begin the process to get Vashon posthumously admitted.

“It wasn’t difficult to do because the process in this case was not really that complicated. You ask the court for what you want, and in this case the law was clear,” Freeland says.

While Freeland isn’t aware of any other cases like Vashon’s, he is sure they are out there. “They are probably buried in the minds of Negroes, people who were deprived of status time and time again.

“There’s not always a court that can rectify the errors. But this was just a case of saying, ‘This was wrong.’ They had the power to make it right. I think that is what attorneys can take away from this: Long-standing wrongs can be corrected.”