Another year has passed, and it is once again my opportunity to report on the finances of the ABA. I will start with our fiscal 2018 results as audited by Grant Thornton. I will then report on the year-to-date results for fiscal 2019, and finally I will outline the work on the fiscal year 2020 general operations budget. This last segment will cover a recap of the financial changes over the last four years and the challenges to be addressed as we implement our new membership model.

Grant Thornton issued an unqualified audit opinion for the fiscal year ended Aug. 31, 2018. The audit includes an audit of our government grants. The audit committee reviewed the audit and recommended acceptance by the Board of Governors, and the Board did in fact accept and approve the audit at its meeting Jan. 25.

The good news from FY2018 is that we added $3.7 million to our net assets. (Go to ABAJournal.com/audited_results to see the final audited results.) As you can see from the chart below (slight differences due to rounding exist throughout), on a consolidated basis, operating revenue was $199.4 million, and operating expenses were $209.3 million, producing an operating deficit of $9.9 million. Although we had a $9.9 million consolidated operating loss, we saw strong investment performance ($10.3 million investment income) which was not budgeted for operations. We also saw a decrease in the pension liability because of rising interest rates ($8.3 million). These two positive changes were offset by the one-time expense for the Voluntary Separation Incentive Program ($6.7 million). 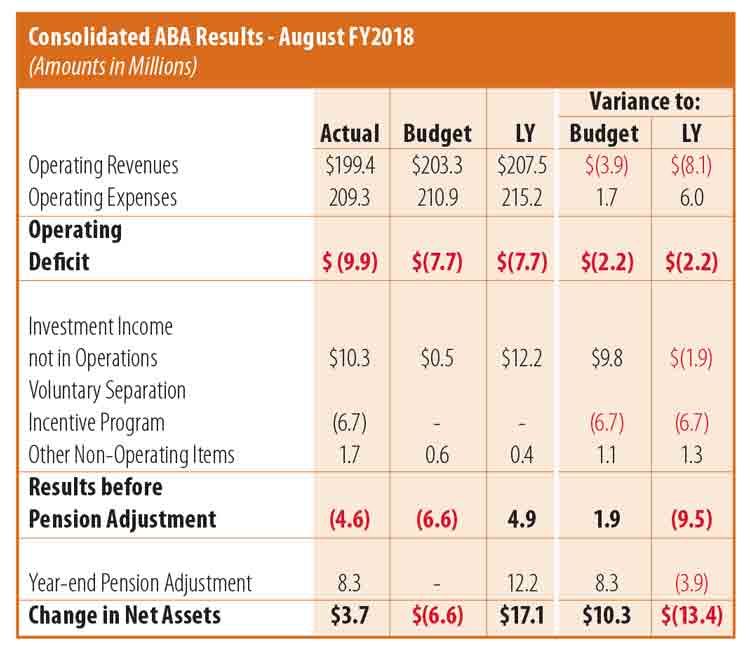 The association has historically managed expenses within or below budget, but the revenue component of the budget has been the weak point. In FY2018, expenses were $1.7 million favorable to budget and $6 million less than last year. Favorable variances in sections ($4.5 million) and gifts ($2.6 million) were offset by unfavorable variances in grants ($3.6 million) and general operations ($1.8 million). The general operations expense line was unfavorable to budget mainly due to legal fees. 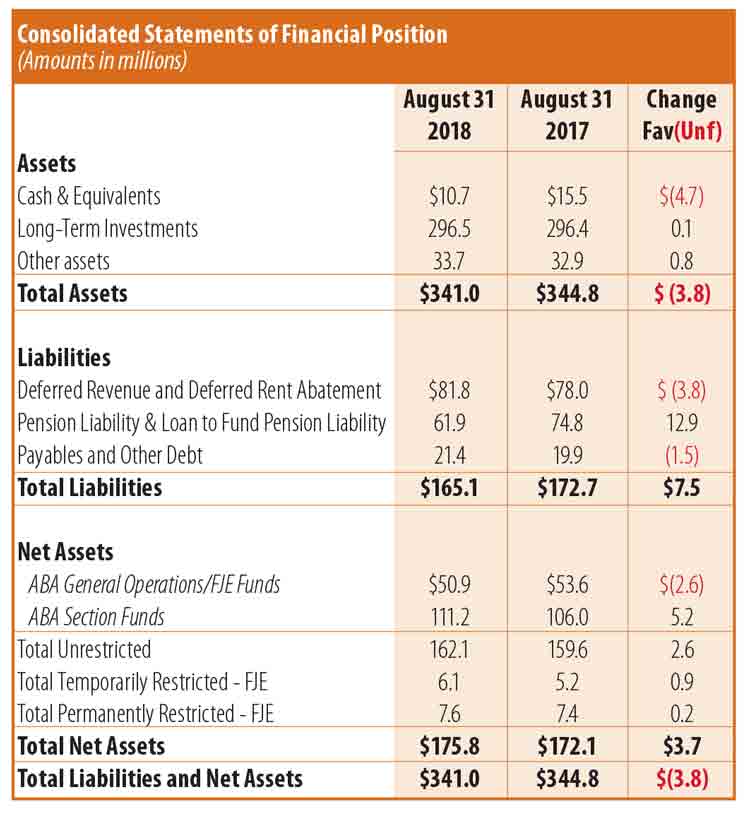 The association’s balance sheet is strong, but it is important to review the components and the changes in the components. At the close of FY2018, the association had $341 million in assets and $165.1 million in liabilities, resulting in total net assets of $175.8 million. One of the largest positive changes in liabilities is related to our pension. We have made great progress reducing the pension-related obligation by $12.9 million since Aug. 31, 2017. Of the total unrestricted net assets of $162.1 million, $50.9 million is attributable to general operations/Fund for Justice and Education, $111.2 million is attributable to the sections, and the balance are temporarily or permanently restricted funds. 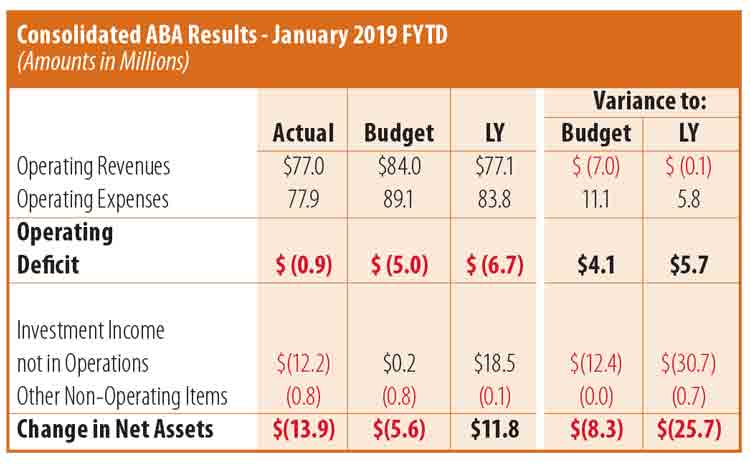 From the fiscal year-to-date FY2019 results we see that consolidated operating revenue through Jan. 31, 2019, was $77 million, which was $7 million below budget. Revenue budget variances are primarily due to unfavorability in grants of $4.3 million (timing), general operations of $2.1 million, and sections of $1.1 million. The main driver of the general operations revenue shortfall to budget is new membership model activity; however, this has no impact on net results. For the NMM, FY2019 budget included $7.4 million in expenses and $7.4 million in revenue (investment income for ops) signifying that the money would be spent from reserves. We record the revenue when we spend the money (incur expense). Unfavorability in section revenue is driven by meeting fees ($0.9 million) and dues ($0.4 million).

Through the same period, consolidated operating expenses of $77.9 million was $11.1 million favorable to (under) budget. Favorable expense budget variances are mainly driven by sections ($4.4 million), general operations ($4 million) and grants ($3.3 million, timing). The section favorability is a result of lower expenses across all reporting line items. The general operations favorability is due to lower fringe benefits costs and lower legal expenses. Spending for the NMM has also been a bit slower than expected, resulting in favorability of $2 million, which is mostly timing.

Through Jan. 31, 2019, consolidated expenses are $5.8 million favorable to prior year, driven by general operations ($5.3 million), sections ($2.8 million), offset by gifts ($2.9 million). General operations year-over-year favorability is mainly due to lower salaries and benefits (smaller staff size after VIP) and lower legal expenses. Sections are favorable to prior year due to the $2 million transfer made from the Taxation Section to its quasi-endowment in FY2018.

On a consolidated basis, expenses exceeded revenue by $0.9 million, which is favorable to budget by $4.1 million and favorable to prior year by $5.7 million. The effect of the more volatile investment market resulted in a loss of investment income of $12.2 million, which mostly contributed to the $13.9 million reduction in total net assets. 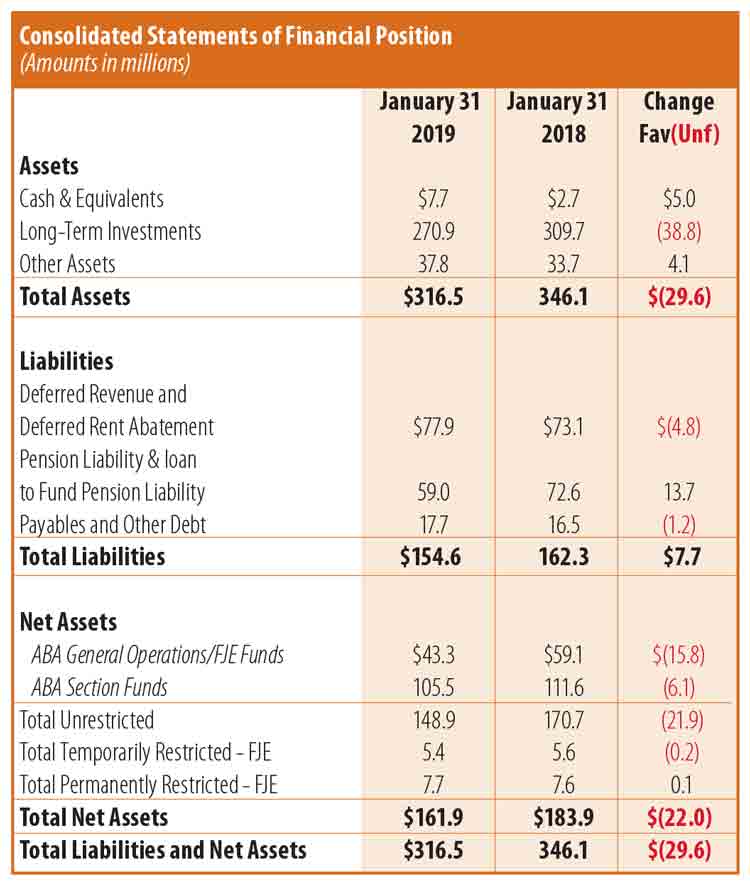 Given the continued softness in dues revenue in the past years (see chart), the FY2020 budget once again requires a careful look at expenses and some reprioritization of our work to gain efficiencies and reduce overall expenses. The budget task will be exceptionally hard because we have significantly decreased expenses over the past few years: The expense chart shows a net reduction of $13.4 million, or 13 percent, between FY2016 and the FY2019 budget (special initiative expenses are excluded from expense numbers). Also, FY2020 will be the first year of full implementation of the NMM, which adds to the complexity in the short term. Our preliminary analysis shows that we will need to cut the FY2020 budget by approximately $6 million because of the repricing of dues and relying less on our investment income to cover operations (2.75 percent of investment income).

These additional reductions are challenging, considering the significant reductions over the last four years and the breadth of the work undertaken by the ABA. Prioritization will be critical to finding ways to manage expenses while still delivering on our value proposition. 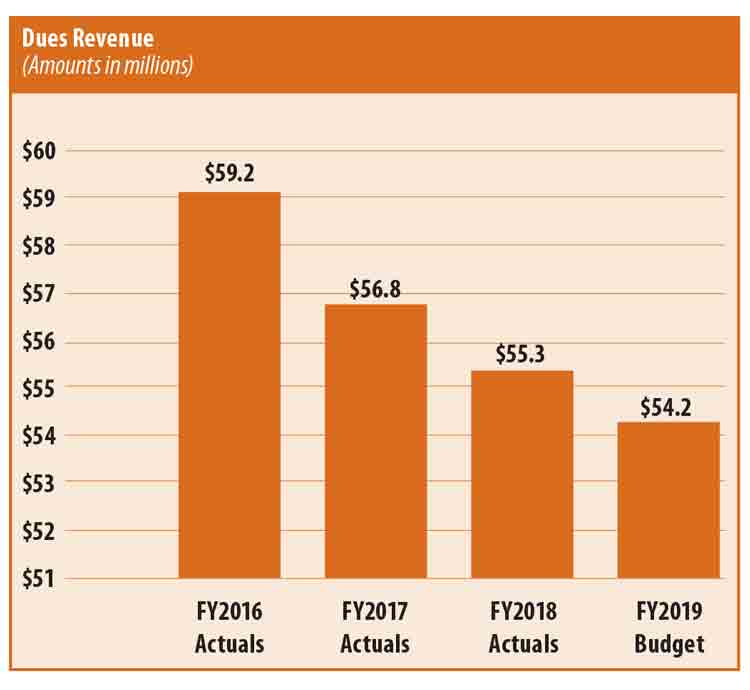 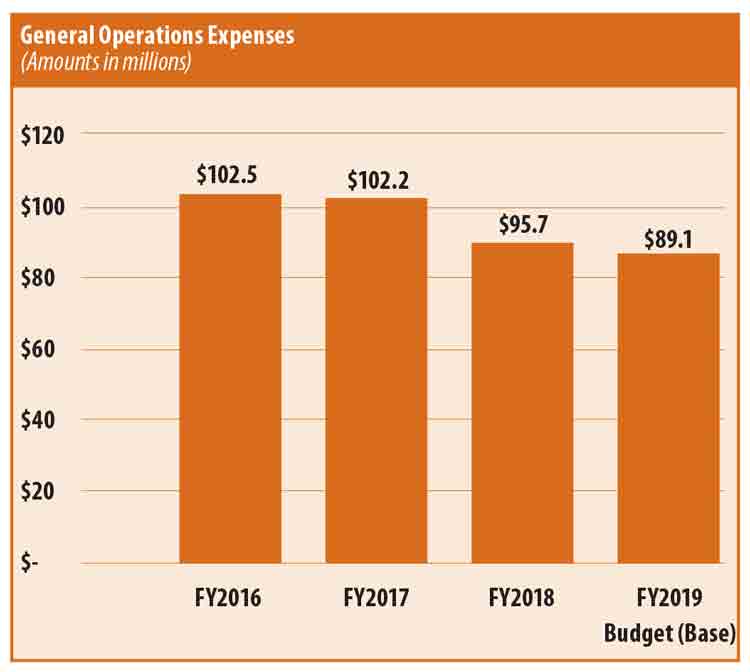 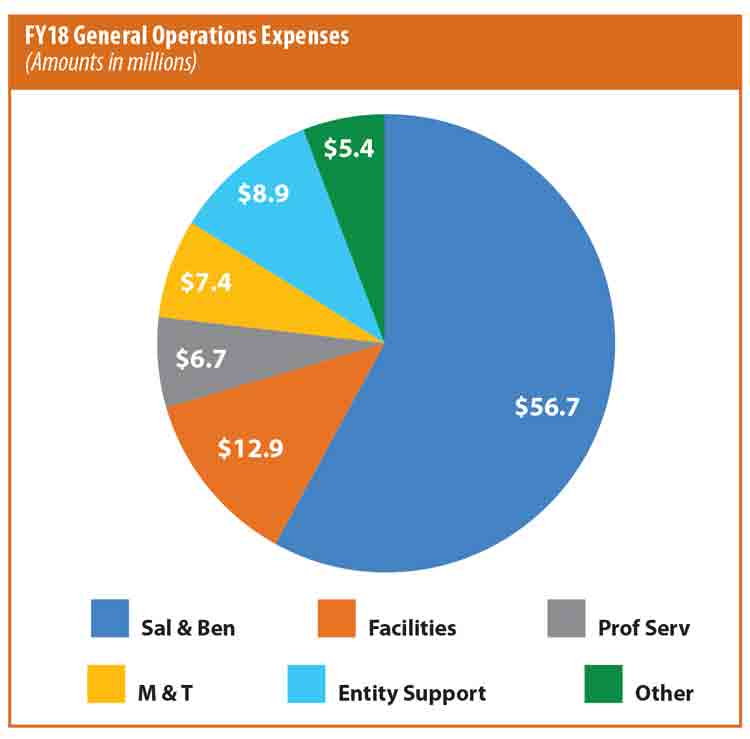 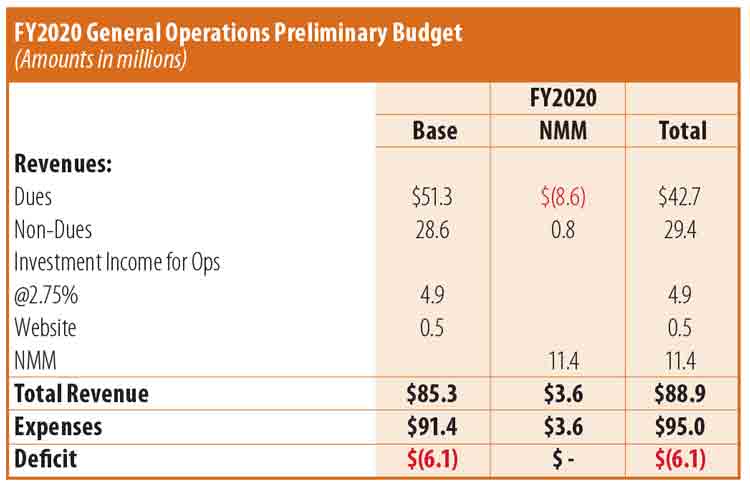 These are challenging issues. Everyone working on the issues wants the association to thrive and prosper. With the help of the many volunteer leaders and an incredible financial services team, we will continue to outline the issues and alternatives to help make wise financial decisions that lead this association to prosperity. Thank you for your commitment to help us achieve financial stability.

Repetitive budget cuts are not a sustainable method of realigning our revenue and expenses. We know that an organization cannot cut its way to financial health, but it is also the case that we cannot ignore the continued softness in revenue and therefore we must continue to manage expenses until we are able to stabilize revenue (both dues and nondues).

It is my honor to serve as your treasurer. Thank you.