ABA announces its slate of nominees for leader positions 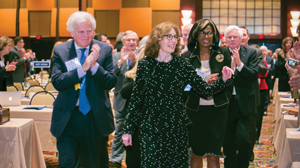 When Linda A. Klein of Atlanta was named the ABA’s president-elect nominee in February by the Nominating Committee, she also became part of a significant trend in the association’s leadership ranks.

That means the ABA will have two female presidents in a row for the first time in its history. Moreover, Brown—a partner at Locke Lord in Morristown, New Jersey—will be the first African-American woman to serve as the association’s president.

And the consecutive string of female presidents at the ABA won’t end with Brown and Klein. Hilarie Bass, a shareholder and co-president of Greenberg Traurig in Miami, is running unopposed to become president-elect in August 2016 (and president a year later), which makes her selection a given.

The fact that the ABA will have three female presidents in a row is part of a trend toward greater diversity in the association’s leadership ranks. Klein, who is managing shareholder in the Georgia offices of Baker, Donelson, Bearman, Caldwell & Berkowitz, made note of that trend during an interview with the ABA Journal at the midyear meeting.

“It makes me proud,” she said. “It gives me a lot of confidence in the future of our association because diversity leads to the best decisions.”

In other action, the Nominating Committee announced its choices to fill 12 seats on the 38-member Board of Governors, which oversees the association’s administrative operations and addresses certain policy matters between meetings of the House of Delegates.

The House will vote on all the nominees in August. The Nominating Committee’s selections are virtually assured of being elected by the House.

Under the ABA Constitution, the association’s presidents are not actually elected to that office. Rather, the House elects a candidate—invariably, the choice of the Nominating Committee—to the office of president-elect. After a year, the president-elect automatically becomes ABA president.

Klein will be the sixth Georgian to serve as ABA president and the first since R. William Ide III of Atlanta in 1993-94.

While the House will vote on only the president-elect in August, in 2016, because of the quirks of staggered terms, it will confirm selections to serve in all four of the association’s officer positions: president, chair of the House of Delegates (two-year term), and secretary and treasurer (both three-year terms).

Photo of Linda Klein by Kathy Anderson, as well as all subsequent photos unless otherwise credited

WHO SHE IS: Managing shareholder in the Atlanta offices of Baker, Donelson, Bearman, Caldwell & Berkowitz. Member of ABA House since 1998 and served as chair in 2010-12. Member of Advisory Committee to Chair of the House of Delegates. Member of Magna Carta 2015 Committee. Past chair of House Committee on Rules and Calendar (2006-08); Coalition for Justice (2006-10); ABA Day in Washington Planning Committee (2012-14). Past member of standing committees on Delivery of Legal Services (2000-01); State and Local Bar Activities (2001-04); Publication Oversight (2004-10). Council member for Section of International Law and co-chair of ABA Resource Committee in Section of Litigation. Chaired Tort Trial and Insurance Practice Section in 2003-04. Recipient of Margaret Brent Women Lawyers of Achievement Award in 2004. First woman to serve as president of the State Bar of Georgia in 1997-98. Executive council member for National Conference of Bar Presidents from 1998 to 2001, president of National Caucus of State Bar Associations in 2001-02. Received JD in 1983 from Washington & Lee University School of Law in Lexington, Virginia.

WHO SHE IS: Partner at Dinsmore & Shohl in Pittsburgh. Member of ABA Commission on Youth at Risk. Immediate-past chair of Commission on Interest on Lawyers’ Trust Accounts. Past member of the disciplinary board for the Pennsylvania Supreme Court. Received JD in 1986 from University of Pittsburgh School of Law. (District 3 encompasses New Jersey and Pennsylvania.)

WHO HE IS: Partner at Poyner Spruill in Charlotte, North Carolina. Member of ABA House of Delegates since 2004, and currently serves on Nominating Committee as state delegate from North Carolina. Past member of standing committees on the Federal Judiciary (2010-13) and Ethics and Professional Responsibility (2002-05). North Carolina state chair in the Fellows of the American Bar Foundation. President of North Carolina State Bar in 2001-02. Received JD in 1973 from University of North Carolina School of Law in Chapel Hill. (District 5 encompasses Alabama, Kentucky and North Carolina.)

WHO HE IS: Shareholder at Cooling & Herbers in Kansas City, Missouri. Member of ABA House of Delegates since 2006 and currently serves on Nominating Committee as state delegate from Missouri. Past member, Select Committee of the House of Delegates and Steering Committee of the Nominating Committee. President of the Missouri Bar in 2004-05. Member of Kansas City Coalition Against Human Trafficking. Received JD in 1972 from Dedman School of Law at Southern Methodist University in Dallas. (District 9 encompasses Minnesota, Missouri and Wisconsin.)

WHO HE IS: Contract attorney at Reed Smith in San Francisco. Member of ABA House of Delegates since 1988, and currently serves on Nominating Committee as state delegate from California. Member of Steering Committee of Nominating Committee, and vice-chair of Committee on Scope and Correlation of Work. Chaired House Committee on Issues of Concern to the Legal Profession in 2006-07. Past member, Select Committee of the House (2010-11). Served previous term on Board of Governors in 2000-03. Past member of standing committees on Meetings and Travel (2003-06 and 2011-14), and Membership (2009-11). Past member of ABA Day in Washington Planning Committee (2006-08). Served as vice president of California State Bar in 1988-89. Founding member and secretary of California Patrons of the Arts in the Vatican Museums. Conductor of Oakland Cathedral Choir from 1965 to 2009. Received JD in 1963 from University of San Francisco School of Law. (District 14 encompasses California.)

WHO HE IS: Sole practitioner in Wilmington, Delaware. Member of ABA House of Delegates since 2000 and currently serves on Nominating Committee as state delegate from Delaware. Member of executive committee of Conference of State Delegates. Served on Steering Committee of the Nominating Committee in 2006-08. Past member of Standing Committee on Professional Discipline (1992-95). Recipient of ABA Sole Practitioner of the Year Award in 1995 from Solo, Small Firm and General Practice Division. President of Delaware State Bar Association in 1991-92. Member of Delaware Heritage Commission. Received JD in 1955 from James E. Beasley School of Law at Temple University in Philadelphia. (District 16 encompasses Delaware, Mississippi, South Carolina and West Virginia.)

WHO HE IS: Partner at Deeley King Pang & Van Etten in Honolulu. Member of ABA House of Delegates from 1997 to 2010. Served on Nominating Committee as state delegate from Hawaii in 2001-10. Member of Standing Committee on the Federal Judiciary in 2008-11. State chair for Hawaii in the Fellows of the American Bar Foundation in 2001-10. President of Hawaii State Bar Association in 1997. Member of Hawaii judiciary’s Attorneys and Judges Assistance Program. Received JD in 1972 from the University of California at Berkeley’s Boalt Hall. (District 17 encompasses Hawaii, Idaho, Nevada and Utah.)

SECTION OF LABOR AND EMPLOYMENT LAW

WHO HE IS: Senior partner at Blitman & King in Syracuse, New York. Member of ABA House of Delegates from 1992 to ‘98. Past member of Standing Committee on Group and Prepaid Legal Services (1996-99). Member of Joint Committee on Employee Benefits since 1981. Chaired Labor and Employment Law Section in 1987-88. Chaired New York State Bar Association’s labor law section in 1980-81. Received JD in 1959 from Syracuse University College of Law in New York.

WHO HE IS: Underwriting counsel for New Mexico at Stewart Title Guaranty Co. in Albuquerque. Chairs ABA Council for Racial and Ethnic Diversity in the Educational Pipeline. Vice-chair (Real Property Division) of Section of Real Property, Trust and Estate Law. Section liaison to the Commission on Racial and Ethnic Diversity in the Profession and the Commission on Hispanic Legal Rights and Responsibilities. Past president of New Mexico Natural History Museum Foundation (1999-2000). Received JD in 1983 from Stanford Law School.

WHO SHE IS: Deputy attorney in civil division of Missoula County Attorney’s Office in Montana. Liaison from ABA Young Lawyers Division to Standing Committee on Bar Activities and Services. Served as YLD’s director of conferences, programs and products in 2013-14. Past president of New Lawyers Section in State Bar of Montana (2012-13). Mentors students through the University of Montana Women’s Law Caucus mentorship program. Received JD in 2008 from University of Montana School of Law in Missoula.

This article originally appeared in the May 2015 issue of the ABA Journal with this headline: “Leader Nominations Announced: Linda Klein is slated to become president in 2016 and a dozen candidates are selected to serve on the Board of Governors.”