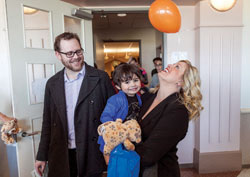 Dennis and Katie Whitaker react after leaving the final adoption hearing with their 3-year-old son, Soul, at the children’s courthouse in Monterey Park, Calif., in 2012. AP Photo/Damian Dovarganes

The ABA is urging enactment of bipartisan legislation in Congress to enhance federal efforts to provide permanency for children in foster care.

The legislation, unanimously passed by the House in October and expected to garner Senate approval as well, would extend and expand the Adoption Incentives Program originally enacted as part of the Adoption and Safe Families Act of 1997. Since enactment, foster care caseloads have fallen by almost 30 percent as children are being more quickly adopted when they cannot be returned to their parents.

Despite the progress, however, more than 100,000 of the 400,000 children in the nation’s child welfare system are awaiting the stability of a permanent family.

According to Rep. Karen Bass, D-Calif., a co-chair of both the Congressional Caucus on Foster Youth and the Congressional Caucus on Adoption, studies show that youths in foster care, especially the approximately 30,000 who age out of the system each year at 18, are more likely to experience poverty, unemployment, homelessness, incarceration and compromised health after they leave foster care. “We know that this is unfair and unacceptable,” she said on the House floor during debate on the legislation.

As Congress prepared to reauthorize the program last summer, the House Committee on Ways and Means, chaired by Rep. Dave Camp, R-Mich., and the U.S. Senate Committee on Finance, chaired by Sen. Max Baucus, D-Mont., made draft legislation available for public comment.

The ABA, submitting comment letters to both committees, highlighted the organization’s long-standing commitment to improving the lives of the nation’s most vulnerable children and families. It emphasized that the association’s policymaking House of Delegates has approved numerous policies since 1988 relating to the child welfare system.

The most recent, adopted in 2010, urges “reform of the federal child welfare structure to increase the amount and flexibility of funding available for child abuse and neglect prevention, family preservation and support, family reunification and family permanency supports.” The policy also urges lawmakers to support all forms of permanency, including parental reunifications and adoptions.

The House-passed bill, H.R. 3205, includes the ABA’s recommendation for continuing the Family Connection Grants program, which funds competitive grants to state, local, tribal and nonprofit agencies for programs connecting children in foster care or at risk of entering foster care with family members who can care for them. In addition to extending those grants, the measure includes more resources for increasing adoptions of older children and would create, for the first time, a new award category for increasing the rate of children leaving foster care for legal guardianship.

“Creating three independent incentive programs to encourage the permanency goals of reunification, adoption and guardianship will help encourage and enable state and county child welfare agencies to work toward and invest in each valuable and important option for children and families,” ABA Governmental Affairs Office Director Thomas M. Susman wrote to the committees.

He also expressed support for amending the Adoption Incentives Program to base rewards to states on adoption rates rather than raw number of adoptions—a step to ensure that states receive incentive payments even as foster care caseloads decline.

After passage of the House bill, Camp applauded the bipartisan support the legislation received. “Continuing to provide states with incentives to move children from the foster care system to adoption,” he said, “will help children across the country realize their dream of a safe, loving and permanent home.”

President Barack Obama weighed in on the issue, proclaiming National Adoption Month this past November. His administration, Obama said, is “working across all levels of government to eliminate roadblocks to adoption and encourage cooperation between adoption advocates, private organizations, and community- and faith-based groups.”

This article originally appeared in the January 2014 issue of the ABA Journal with this headline: “A Push for Adoption: ABA backs bipartisan bill supporting permanent families for foster children.”