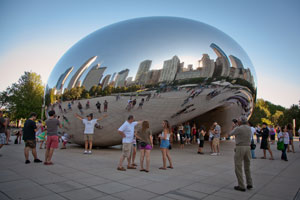 In 2014, the ABA introduced a dramatic-ally revamped format for the annual meeting that emphasized a streamlined schedule of events, a new pricing structure and a more communal feel. The changes were made as part of a three-year effort to reinvent the annual as the signature event of the association year.

The next stage in the evolution of the annual meeting will take place over six days in late July and early August when the ABA convenes its 2015 meeting in Chicago. Planners say this year’s gathering will introduce changes in two key areas—CLE programming and pricing—that should help make the meeting an even more productive and enjoyable experience for attendees.

The annual meeting—the theme of which is “Greatness in Every Direction“—will be held July 30-Aug. 4.

In Chicago, the format introduced at the 2014 annual meeting in Boston will be continued. The main events of the meeting will be held over three days so attendees will be able to come together for a mix of CLE programs and social activities without having to navigate their way through a maze of conflicting events.

That portion of the meeting will start at 5 p.m. on Friday, July 31, with a preview reception at the ABA Expo. The Expo and most other major events will be held at the Hyatt Regency Chicago just off Michigan Avenue, the traditional headquarters hotel for the ABA during its annual meetings in the city.

On Saturday, Aug. 1, 10 ABA showcase programs will be held in the morning, with another five scheduled for the afternoon. A panel titled “The Law as a Platform for Writing” will be held during the lunch hour at the Expo. The program, featuring five leading lawyer-authors, will be followed by a book signing.

The General Assembly, featuring a keynote speaker and presentation of this year’s ABA Medal, will begin at 4 p.m., followed by the President’s Reception at the renowned Art Institute of Chicago. On Sunday, Aug. 2, five more CLE showcase programs will be held in the morning. Informal lunches will be available at the Expo on Saturday and Sunday.

Sections, divisions and other entities will not present their own CLE programs in conflict with the showcase programs. Sections and other entities will refrain from sponsoring social events until the ABA receptions have ended. Entities may sponsor events, including CLE programs, on Thursday, July 30, and from Sunday afternoon until the meeting adjourns on Tuesday, Aug. 4.

All told, there will be fewer CLE programs held in Chicago than at last year’s meeting. The number of showcase programs, for instance, has been reduced from 36 to 20.

But a “less is more” approach has important advantages, says Barbara J. Howard, who chairs the ABA Standing Committee on Meetings and Travel. In the past, annual meetings essentially amounted to “a bunch of silo meetings with very little interaction with other members,” says Howard, the principal at the Barbara J. Howard Co. law firm in Cincinnati. Now “you can bring in incredible CLE programs and speakers that you can’t get anywhere else” while mingling with more colleagues from around the country.

THE PRICE IS RIGHT

Another key change being made for this year’s annual is a streamlined pricing structure that will allow attendees to pay a registration fee that matches what they plan to accomplish at the meeting. Unlike last year’s pricing structure, which provided for a lot of mixing and matching, attendees this year will have the option to choose one of three basic pricing structures:

• The All Access CLE Pass, priced at $495 for ABA members ($695 for nonmembers), allows an attendee to go to just about every event at the annual meeting except section and division social functions that require separate tickets. Included in the All Access Pass are ABA showcase programs, CLE programs presented by sections and other entities, the preview reception at the Expo, the General Assembly, the President’s Reception and business meetings.

• The Networking Pass, priced at $195 for members and guests ($395 for nonmembers), pays for admission to all events covered by the All Access Pass except CLE programs (although tickets to those programs may be purchased separately).

• A standard registration fee, priced at $50 for ABA members and guests ($250 for nonmembers), covers access to business meetings, the ABA Expo (but not the reception) and the General Assembly.

“Last year, we thought a la carte pricing would be welcome,” Howard says, but many people found it confusing and a bad deal. This year’s pricing structure “will give people choices that are easier to understand.”

Efforts to fine-tune the annual meeting format will continue for at least another year, says Howard.

This article originally appeared in the July 2015 issue of the ABA Journal with this headline: “Tweak for Two: ABA is fine-tuning its new annual meeting format to make attendance a better experience for members.”