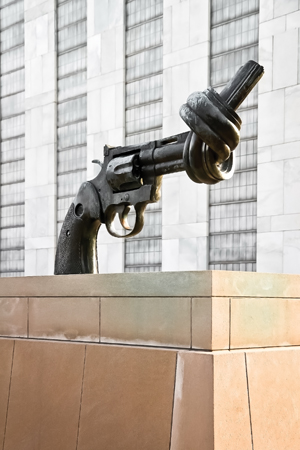 The policy recommendations are contained in a document issued Feb. 27, Firearm-Related Injury and Death in the United States: A Call to Action from Eight Health Professional Organizations and the American Bar Association (PDF).

"The ABA has joined with eight national health care organizations to address the public health crisis of gun violence in this country and to apply public health approaches to curtailing gun violence," said ABA President William C. Hubbard in a statement issued in conjunction with the release of the call to action. "A significant part of the ABA's role was to help make it clear that there are several ways to reduce gun violence that are constitutional and are safely within the law," said Hubbard, a partner at Nelson Mullins Riley & Scarborough in Columbia, South Carolina.

On Feb. 6, the ABA's Standing Committee on Gun Violence issued Gun Violence Laws and the Second Amendment: A Report of the American Bar Association (PDF). The report summarizes the association's policies relating to gun violence and asserts that, even in the aftermath of the U.S. Supreme Court's 2008 ruling in District of Columbia v. Heller, the high court and lower courts "have made clear that the Second Amendment is consistent with and does not bar a broad array of sensible laws to reduce gun violence." In Heller, the Supreme Court held for the first time that the Second Amendment protects the right of responsible, law-abiding citizens to possess handguns in the home for self-defense. But the court also concluded that, as the committee states in its report, "the Second Amendment does not bar a broad range of limitations on who may possess firearms, what kinds of firearms they may possess or where they may possess them."

Each year, more than 32,000 people in the United States die from firearm-related violence, suicides and accidents, according to the Centers for Disease Control and Prevention. That is by far the highest rate among industrialized nations.

The document recommends the following steps to help curb gun violence, which the organizations say are consistent with policies they have adopted in the past:

• Elimination of "gag laws" that prohibit physicians from discussing gun ownership or the safe use of firearms with patients and from warning about the dangers of firearms.

• Restrictions on the manufacture and sale of military-style assault weapons and high-capacity magazines for civilian use.

• And more research to support the reduction of firearm-related injuries and death.

Two additional recommendations were offered by the health professionals' organizations: (1) Improve access to mental health care without broadly prohibiting all people with mental or substance use disorders from purchasing firearms; and (2) create a suitable balance in blanket reporting laws requiring physicians to identify patients who display signs they might cause serious harm to themselves or others that protects confidentiality and encourages patients to seek treatment for mental or substance use disorders.

"We believe this joint call to action by the medical, public health and legal professional organizations will lead to a renewed push for public education and the adoption of significant measures to curb gun violence," says David W. Clark, a partner at Bradley Arant Boult Cummings in Jackson, Mississippi. "There is every reason to think that a public health approach to curbing firearm deaths and injuries would be successful."

This article originally appeared in the June 2015 issue of the ABA Journal with this headline: “Calling for a Cure: The ABA joins medical organizations in advocating steps to curb gun violence.”