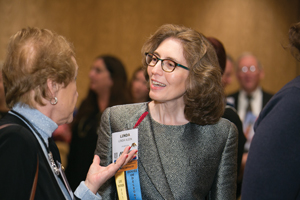 At first blush, legal assistance might not appear to be one of the most pressing needs facing veterans who are homeless or at risk of becoming homeless. But like so many first impressions, that one is wrong.

Although the Obama administration proclaimed in July that an initiative launched in 2009 has resulted in a nearly 50 percent decline in the number of homeless veterans, the latest annual survey produced by the Community Homeless Assessment, Local Education and Networking Groups indicates that the greatest unmet needs of homeless veterans have remained fairly constant.

According to the groups’ survey, four of the top 10 reported unmet needs of homeless veterans over the past five years require the assistance of a lawyer. Those four needs are issues related to child support, driver’s licenses, outstanding warrants and fines, and foreclosures and evictions.

Recognizing the problem, the ABA is urging Congress to enact legislation to expand availability of legal services for homeless veterans and veterans at risk of homelessness.

“Resolving these issues is critical to ending homelessness because they operate as total barriers to housing, employment, benefits and services,” stated ABA President Linda A. Klein of Atlanta in a letter (PDF) sent in September to Rep. Joyce Beatty, D-Ohio, who has introduced the Veterans Legal Assistance Act (H.R. 6046). Klein, who has made improving legal assistance to veterans one of her presidential priorities, emphasized in her letter that the “federal government cannot remove these barriers, but a lawyer can.”

The bipartisan legislation, whose chief co-sponsors are Reps. Steve Stivers and Pat Tiberi, both Ohio Republicans, would authorize the secretary of the Department of Veterans Affairs to enter into partnerships with public and private entities. Homeless veterans and those at risk of homelessness are provided with legal services relating to housing, including eviction defense, and representation in landlord-tenant and foreclosure cases; family law, including court proceedings for child support, divorce, estate planning and family reconciliation; income support, including assistance in obtaining public benefits; and criminal defense, including matters symptomatic of homelessness, such as outstanding warrants, fines and driver’s license revocation.

The legislation would require the partnerships to be equitably established across the United States to include rural communities and tribal lands. In addition, the VA secretary would be required to consult with veterans’ service organizations and other entities to coordinate outreach relationships. The bill also would require groups entering into partnerships to submit periodic reports to the secretary on the legal services they have provided.

“Clearly, we must do more to help our nation’s veterans,” Beatty said when she introduced the legislation. “One way to do so immediately is by expanding access to free, high-quality legal services.”

Klein pointed out that most of the work in the legal community to help homeless veterans has been carried out by volunteer lawyers, specialized nonprofits and cash-strapped civil legal aid offices. She emphasized that it “will take both the VA and the legal community working together in an even more concerted way to meet the need of veterans. Allowing increased private-public partnerships with the VA to improve these veterans’ access to legal help would take a desperately needed step toward ending the scourge of veteran homelessness in America.” Klein called the legislation a “powerful tool to make this collaboration real.”

Beatty’s bill is one of numerous pieces of legislation introduced during the 114th Congress that seek to help homeless veterans. Appropriations legislation enacted in late September includes full-year funding for two programs providing for some legal services to homeless veterans: $320 million for Supportive Services for Veteran Families and $227 million for the Grant and Per Diem Program.

In addition, President Barack Obama signed a bill reauthorizing several VA programs that aid homeless veterans, including those providing assistance for veterans’ reintegration, help for female veterans and their children, and referrals for treatment and rehabilitation services.

This article originally appeared in the December 2016 issue of the ABA Journal with this headline: "Reinforcements Are on the Way: The ABA supports efforts in Congress to bolster legal services for homeless veterans through public and private partnerships."