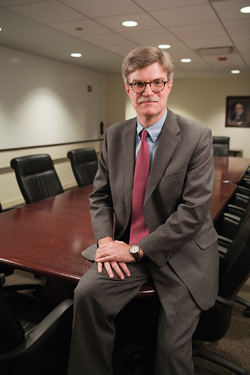 The ABA’s finances are sound.

That might suffice as a full and adequate report on our financial situation to those Association members for whom a Treasurer’s Report has all the appeal and excitement of hearing your plumber talk about the state of your home’s plumbing.

Without sound finances, our Association won’t be able to carry out the work you see as core to our purposes. Without a sound financial structure, we can’t promote access to justice or the rule of law, or improve legal ethics, or vet federal judicial nominees, or accredit law schools. With sound finances, we can be the voice of the legal profession and the guardians of the justice system.

Thus, what follows is a tour of the most important aspects of the Association’s financial picture, as of early 2012, including audit and financial results for last year, FY 2011, our investments, our pension obligations, the recent sale of the D.C. building, and the status and work of our Financial Services department. And the overall news is good.

We’ve all recently lived through the worst economic crisis in the lifetime of virtually every reader of this magazine. As lawyers, most of us are still struggling, in one way or another, with the wrenching changes that began before the recession and that are still working their way through our profession and the legal industry.

Thanks to the good financial stewardship of prior volunteer leaders, including my predecessor, the incomparable Alice Richmond, and thanks to the excellent day-to-day financial management by our current senior staff leaders, the Association is in good financial shape, ready to face the future. 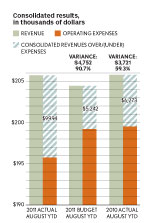 The Association’s audit for the fiscal year ending August 31, 2011 (FY 2011), including our A-133 audit related to our work on government grants, is now complete and was “clean” – we received an unqualified opinion from our auditors.

The only issue of significance was that, in confirming the value of our investments, our auditors uncovered the fact that the reports we had received as of our year-end, August 31, were actually based on July valuations for some of our investments, leading to about a $1 million overstatement of their value. The problem that led to this inaccurate reporting has been corrected.

There were also some minor changes in revenues and operating expenses from the Preliminary and Pre-Audit results previously reported to the Board. Consolidated Revenue decreased by $49,000, and Consolidated Operating Expenses were adjusted upward by $15,000. None of these changes were material.

Our audit was performed for the first time by our new auditors, Grant Thornton LLP. After a rigorous RFP process, extensive interviews, and significant due diligence, they were selected by our hard-working Audit Committee, chaired last year by Renie Yoshida Grohl, who was succeeded this year by Marshall J. Doke, Jr. Our first year’s experience with our new auditors was a good one, and validated the Audit Committee’s decision to retain them. 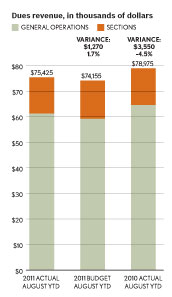 As you will see below, on a consolidated basis, the ABA ended FY 2011 on a positive note.

Remember that the Association’s consolidated financial statements include not only the ABA, including all of its sections and other entities, but also the Fund for Justice and Education (FJE), the ABA’s charitable arm, and the James O. Broadhead Corporation, which owned and operated the ABA’s D.C. building.

Dues Revenue. Of course, dues revenue remains at the core of our financial operations.

As shown in the accompanying chart, from a peak of $70.8 million in FY 2007, ABA General Operations dues revenues have fallen to $61.2 million in FY 2011, a 13% drop. FY 2007 is an important measuring year, as that was the last year in which the ABA increased its dues rates, although some of the Sections have increased their dues rates since then. This decline in dues revenue has closely tracked a decline in dues-paying ABA members.

Do note that the last data point in this chart is a budget number for this year (FY 2012), reflecting, at least for General Operations dues revenue, the Board’s consciously aggressive dues budgeting decision for FY 2012. The Sections are even more optimistic, collectively budgeting for a 9.7% increase in dues revenue in FY 2012.

General Operations Expenses. General Operations expenses exceeded budget by $6 million. However, the overall trend in reduction of expenses continued as FY 2011 operating expenses of $103.1 million decreased $4 million or 3.8% from FY 2010.

The $6 million variance from budgeted expenses was largely composed of three items – first, a $3 million transfer of publications inventory from General Operations to the Sections (which, while reflected as an expense under General Operations, had no effect on the Association’s consolidated financials); second, the inappropriate accounting treatment in the FY 2011 budget treating $1 million in indirect cost recovery associated with our work on grants as an offset to expense (lowering expense) rather than as revenue; and, third, a budgeted $1.6 million credit (or reduction in expense) for which there was not any historical support, current documentation, or actual realization. As you may know, the FY 2011 budget was developed at a time before our current Financial Services leadership was in place. Our current CFO and Controller and I have made sure that the FY 2012 budget will correct the improper budgeting of the latter two items.

A favorable variance in Compensation and Benefits expense to budget of $1.1 million was mainly due to decreased salaries and defined pension benefit expense, offset to some extent by FY 2011 bonuses that were not budgeted and that were greater than FY 2010 bonuses. The January 1, 2011, pension plan amendment (on which my predecessor, Alice Richmond, reported to you in this space last year) reduced the ABA’s pension benefit accrual by $912,000. General Operations reflected about 90% of that $912,000, with Section results reflecting the remaining 10%. 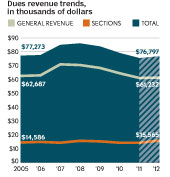 Even a casual observer of the news would have noticed the volatile performance of the investment markets in recent months, stretching back well into the Association’s FY 2011 and forward into this fiscal year.

In this turbulent environment, the ABA has tried to position its investments prudently, with appropriate diversification. The Board’s Investments Subcommittee, ably chaired by G. Nicholas Casey of West Virginia, has been delegated responsibility for the investment of the ABA’s investment funds, including responsibility for making options available for the investment of Section reserves. At the December 2011 Investments Subcommittee meeting, the ABA made changes to the available long-term investments options. Acting on the advice of its investment advisor, Deutsche Bank Alex Brown, to have greater diversity in its equity investments, the ABA has added two actively-managed funds to its portfolio in the developed international and emerging markets sectors. These funds were also made available, like our other investment options, to the Sections for use in their investments. 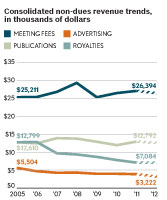 Significantly, while this figure appears staggeringly large, it remains only a measure of a cumulative future liability, and changes in this figure translate into required current cash obligations only over long periods. For example, changes associated with this August 31, 2011, measure of our unfunded pension liability will not affect any contributions required to be made before September 2013. Moreover, future changes in interest rates and in investment performance may well affect our payment obligations.

Far more significant than this large annual measure of our future liability is the most recent schedule of estimates of our required contributions to the pension plan. Assuming no change in interest rates or investment performance, we will be required to make very substantial cash contributions over the next several years, as shown below. 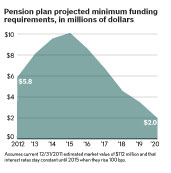 On December 16, 2011, we closed on the sale of the ABA’s D.C. building. Purchased in 1994 for $20.4 million with an additional $12.9 million in improvements over the years, the building was sold for $69.25 million to JBC, an entity controlled by the John Buck Company. After loan repayment, taxes, and expenses, $47 million was available for investment.

The actual invested funds are not segregated from other ABA investments, but invested as an integral part of the ABA’s overall investments, under the watchful eyes of the Investment Subcommittee. At its October meeting, however, the Board approved the establishment of an accounting reserve on the Association’s financial statements by which the gains on the sale will be used to fund a significant portion of the ABA’s D.C. real estate expense in the coming years. The Board believes that this treatment of the gain will preserve, protect, and use appropriately the legacy that wise volunteers built for the Association by the 1994 purchase of the D.C. building. We also believe that a clearly-identified reserve should provide transparency and accountability in the use of these funds.

More recently, the Association has signed a long-term lease for our new D.C. offices at 1050 Connecticut Avenue. N.W., at L Street and 18th Street. It’s a lovely building, sitting above the Farragut North Metro stop, and the space will be a dramatic improvement in usability and functionality for our staff and visiting members. A move to the new space is expected in Spring 2013.

Before closing, a word of praise and thanks. The ABA is blessed with a superb Financial Services team, led by Deputy Executive Director and Chief Financial Officer Larry Gill and our Controller Jerry Kiska. They lead a reorganized and reinvigorated team of true professionals, and you should be truly thankful that we have them on board.

In concluding my first Journal report to you, I solicit your comments and questions, particularly about this report. As have all the Treasurers with whom I have worked, I believe that clarity and transparency about the ABA’s finances are crucial, and any comments or criticism on how I might achieve that are most welcome. You can reach me at [email protected].