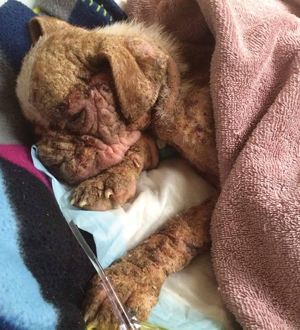 After a delivery driver noticed an emaciated and dehydrated puppy while making a stop at a Pennsylvania farm last summer, he urged the pup’s breeder to give up the sick animal so it could get immediate care.

The puppy’s skin was infested with maggots and smelled of rotting meat. It was unclear whether the 7-week-old dog would survive. Janine Guido, founder and president of Speranza Animal Rescue, was determined to try. She named him Libre, meaning freedom, and got the sick pup to a veterinarian’s office.

Libre’s rescue and recovery were documented on both the Speranza Animal Rescue’s and the veterinary clinic’s Facebook pages, where thousands of fans awaited every update. Those same thousands were outraged, however, when Susan Martin—director of the Lancaster County Society for the Prevention of Cruelty to Animals and tasked with enforcing the state’s animal cruelty laws—announced she would not be pursuing charges against Libre’s breeder, Benjamin S. Stoltzfus.

Martin said in a statement that she “found no evidence” that Stoltzfus “had been neglecting this dog.”

The Libre case prompted Stedman to strengthen protections against animal cruelty. He said in a statement that “prosecutions and investigations will be more professional and decisions to charge or not charge more consistent and fair to everyone.”

But that wasn’t all. Pennsylvania Sen. Richard Alloway introduced a bill, called Libre’s Law, which would make animal neglect—such as when a dog is denied needed veterinary care—a felony. “Animal abusers deserve to receive a punishment that fits the heinous nature of their crimes,” Alloway said at a rally in September. “Libre’s story inspired me to take the next steps to ensure no animal is forced to endure the kind of awful treatment that nearly took the life of this kind-hearted animal.”

Alloway’s bill is yet another move by lawmakers across the country who are seeking to strengthen animal rights as the pet industry continues to grow. The American Pet Products Association estimated that Americans would spend $62.75 billion on furry and feathered friends in 2016, up from $38.5 billion in 2006 and $21 billion a decade before that. But spending on pets doesn’t neces-sarily mean they’re well-cared for; they still need protection.

More legal protections are coming into place as a growing number of advocates are working on their behalf. “There is an undeniable trend in motion,” says Cory Smith, director of public policy for companion animals at the Humane Society of the United States. “People love their pets, and pets are interwoven throughout the fabric of our society.”

The first animal welfare law was created in the Massachusetts colony in 1641, and New York became the first state with an animal cruelty law nearly two centuries later. Other states eventually followed by passing felony cruelty statutes in the years to follow. The federal Animal Welfare Act was signed into law in 1966, prompted by a stolen pet dog named Pepper who was sold into research.

Various animal laws continue to be passed and are reaching into new realms. Oregon’s legislature, for example, passed a first-of-its-kind law in 2013, recognizing that animals “are sentient beings capable of experiencing pain, stress and fear.”

In 2015, Tennessee became the first state to allow good Samaritans to break into hot cars to save dogs in distress. Similar measures have begun to spread. In the fall, California became the seventh state to pass the law.

And last April, the U.S. Sentencing Commission voted unanimously to raise the recommended minimum sentences for dogfighters to 21-27 months, up from a range of six-12 months. The commission was prompted, in part, by nearly 50,000 letters from the public asking for the change.

These new laws are having “an immediate, tangible impact on suffering animals,” says Animal Legal Defense Fund attorney Lora Dunn, who is part of an ALDF team that tracks yearly improvements in animal protection laws across the country.

There have been advances in the civil realm as well. For example, in the early 2000s, state legislatures began allowing for the creation of legally binding “pet trusts”—money set aside to care for a pet—after the owner’s death. This past June, Minnesota became the 50th state to pass such a law.

Animal lawyer Adam Karp, once described as “St. Francis with a briefcase,” also points toward a handful of cases in which plaintiffs collected large awards in wrongful death and vet malpractice lawsuits. These cases demonstrate, he says, that courts are moving beyond the old view, that pets “were literally valueless.”

Pets are still considered property, but these rulings signal that the law is beginning to realize their roles as family members. “Larger awards unswervingly signal that animal lives matter,” Karp said via email.

Anti-tethering laws, under which dogs may not be kept tied up on chains for extended periods of time, are becoming common at the city and county level. Hundreds of jurisdictions now also have ordinances that prohibit puppy mills, requiring pet stores only to sell rescue animals instead of commercially bred cats and dogs.

Even law schools are beginning to catch up. The Animal Legal Defense Fund finds that while only nine law schools had animal law classes as late as 2000, that number increased to 151 by 2015.

But observers say the work is far from over, which perhaps reflects animals’ still unsettled status in society. “I see changes on specific issues. But not necessarily on the overall way we treat companion animals,” says Valparaiso University law professor Rebecca Huss.

Huss notes that even with the tougher laws, animal cruelty is still common. No one is sure exactly how common, since it’s only just starting to be tracked by the FBI.

“If things had really changed for animals, I think we’d be seeing fewer cases,” says Huss. “Individual cases—we might have more of a remedy, but we don’t seem to be changing the culture enough to make a real difference in a lot of animals’ lives.”

There’s also a call to begin the process of protecting the animals who’ve been excluded from nearly all the laws that protect cats and dogs—the millions of cows, pigs and chickens raised and killed on American farms every year.

“Farmed animals have been completely left out of legal progress,” says Mariann Sullivan, co-founder of the nonprofit Our Hen House. “At a very minimum, I would like to see cruelty laws, which prohibit unnecessary suffering, applied to the treatment of all farmed animals and enforced.”

Since his rescue, Libre the puppy has grown stronger and healthier. And Guido adopted him, calling him “the poster boy for animal cruelty and neglect”—a nickname she gave him when Libre’s Law was introduced.

The Pennsylvania Senate unanimously passed the law in October. It was folded into a package of animal protection bills but did not get a vote on the floor of the House. National Rifle Association lobbyists, concerned that legislative language in the package could affect pigeon shoots, were blamed for the holdup.

Sen. Alloway plans to bring the bill back in the new year.

This article originally appeared in the January 2017 issue of the ABA Journal with this headline: "Animal Advocacy: Lawmakers are strengthening animal cruelty measures across the country."