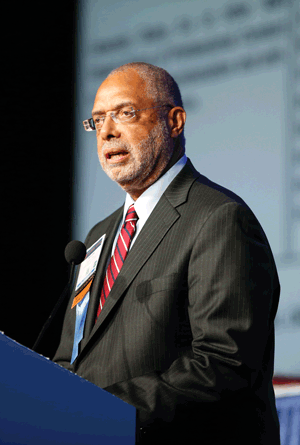 The ABA House of Delegates took several actions during its sessions at the 2016 annual meeting in San Francisco to assert the association’s commitment to increasing diversity and inclusion in the legal profession and American society.

In one of its most significant actions, the House voted overwhelmingly to make it an outright violation of the ABA Model Rules of Professional Conduct for a lawyer to engage in conduct “that the lawyer knows or reasonably should know is harassment or discrimination on the basis of race, sex, religion, national origin, ethnicity, disability, age, sexual orientation, gender identity, marital status or socioeconomic status in conduct related to the practice of law.”

In the run-up to the House debate, there were some rumblings of opposition to the amendments to ABA Model Rule 8.4 that were developed primarily by the Standing Committee on Ethics and Professional Responsibility. A few opponents even wrote to House Chair Patricia Lee Refo of Phoenix to voice their concerns that the amendments would undermine free speech and religious freedom.

But the resolution, which was co-sponsored by a number of other ABA entities, fostered no debate in the House and few overt signs of opposition beyond a smattering of “nays” when the measure was put to a voice vote. There were so many “salmon slips”—so named for their distinctive orange color—from proponents prepared to speak in support of the measure, that Refo said she was struggling to come up with a way to describe the volume. Only a few of the approximately 70 proponents who filled out salmon slips addressed the House.

The resolution proposing the amendments to Rule 8.4 was introduced by Myles V. Lynk, a professor at the Sandra Day O’Connor College of Law at Arizona State University in Tempe who chairs the ethics committee. He urged the House to act now to adopt the amendments and noted that 25 states already have revised their ethics rules to incorporate the changes being proposed for Model Rule 8.4.

“The states have not waited for the ABA to act,” he said. Lynk also cited the widespread support for the amendment among bar associations and ABA sections and committees. “Are they all wrong?” he said.

One of the first speakers in favor, Mark Johnson Roberts of Portland, Oregon, who chairs the Commission on Sexual Orientation and Gender Identity, mentioned that he was passed over by a law firm hiring committee as a new lawyer 28 years ago because he is gay. Roberts focused his remarks, however, on a story about a young female colleague who was groped and accosted by an older male opposing counsel at a holiday party. The woman went to her bar association to file a complaint, only to discover that the man’s behavior violated no ethics rule—unless he had been convicted of a crime.

Don Bivens of Phoenix, a delegate representing the Section of Litigation, said the section had a detailed discussion with the ethics committee about its concerns, which centered on potential penalties for vigorous representation of clients. Those discussions, he said, resulted in revisions that added the “knows or reasonably should know” language. The resolution explicitly does not preclude legal advice, particularly in regard to otherwise legal behavior in jury selection.

Previously, the idea that lawyers should not engage in discrimination or harassment was contained in the comments to Model Rule 8.4. But “comments are only guidance or examples,” Lynk said. “They are not themselves binding.”

By adding the prohibition against discrimination or harassment to the black letter of the rule, he said, “this was a way for the ABA to provide guidance to the states. Every jurisdiction is a little different, so the ABA rule may help foster more uniformity.” (The Model Rules are the basis for binding rules of professional conduct for lawyers in every state and the District of Columbia.)

Now that the House has adopted the amendments to Model Rule 8.4, the Policy Implementation Committee in the Center for Professional Responsibility will begin working with states to get the new version of the rule adopted. As to how that process will unfold, Lynk said, “I’m going to wait and see. I know there are questions out there, and I look forward to a dialogue. These are not easy issues, and we all appreciate that.”

Lynk credited the ethics committee for its efforts on this issue over the past two years. “I think the committee undertook a tremendous piece of work over a two-year period,” he said. “We worked incredibly hard on this as a team, and I’m proud of its willingness to take on such a difficult task and take it to completion.”

A related resolution that concerns diversity in the legal profession had an easier time. Resolution 102, sponsored by the National Conference of Federal Trial Judges, called for more diversity on every part of the federal bench, including magistrate and bankruptcy judges.

The ABA continued to address diversity and inclusion, which was a theme for outgoing ABA President Paulette Brown. The ABA passed resolutions on the “school-to-prison pipeline” and added marital status, gender identity and gender expression to its list of reasons potential jurors should not be denied eligibility for jury service. It also urged legal services providers—large law firms, in-house legal departments and others—to expand opportunities for attorneys of all backgrounds.

A resolution that calls on Congress to make privately drafted parts of the law freely available attracted accusations in the House of Delegates that the ABA was trying to give away other people’s intellectual property.

When federal agencies incorporate privately drafted standards into their rules by reference, Resolution 112 asks Congress to make the relevant portion of those privately drafted standards available online to the public. The measure, sponsored by the Section of Administrative Law and Regulatory Practice, was intended to advance the idea that the public should have access to laws that regulate things such as food additives, windshield safety standards and toy safety.

Proponents of the measure say these rules are not accessible for free in any place but the reading room of the Office of the Federal Register, where researchers must make a written request for an appointment. Paying for access to the rules could cost anywhere from $40 to thousands of dollars, professor Ronald Levin of Washington University in St. Louis told the House.

The resolution was criticized as going too far and not going far enough. Beverly Quail, a partner at Ballard Spahr in Denver and a Colorado delegate to the ABA, said taxpayers should not foot the bill for publishing standards of interest to very few people.

“The promulgation of the edicts of government is at the heart of the rule of law,” said Malamud, an associate member of the ABA who received special privileges on the floor. “Writing down the law is meaningless if we cannot read it, but we must be permitted to do more than simply read the law. We must be permitted to speak the law, to share [it] with fellow citizens.”

A motion to postpone the resolution indefinitely failed in a vote of 141-206. Although the opposition remained, the House voted in favor of Resolution 112.

Among other issues, the House: