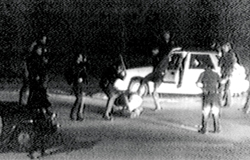 On March 3, 1991, Rodney King, a 25-year-old parolee, was arrested near Hansen Dam in Los Angeles after leading police on a high-speed chase. The incident might have gone unnoticed but for an amateur photographer’s video, which revealed several LAPD officers repeatedly kicking, stomping and clubbing a helpless King.

On March 14, four officers were indicted on multiple criminal charges. The widely viewed—albeit edited—video, along with transcripts of radio communications the night of the arrest, suggested a clear-cut case of police brutality. But the defense team got a break when the trial was moved north to Simi Valley, a community 40 miles away—and in many respects worlds apart—from LA.

When a predominantly white jury acquitted the officers on all but one of 11 counts, city officials’ worst fears came to pass. Over the next four days, a wave of arson and looting spread throughout many of the poorer sections of Los Angeles County. With 54 deaths, more than 2,300 injuries and $1 billion in property damage, the 1992 LA riots marked the deadliest civil disturbance in the U.S. since the Civil War.