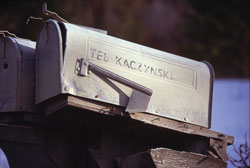 For 17 years, mail bombs sent to universities, airlines and others killed three and injured nearly two dozen. Despite conducting one of the most expensive investigations in the history of the FBI, authorities had few solid leads. The feds identified the case by the acronym UNABOM (University and Airline Bombing), and reporters called the perpetrator the Unabomber.

The Unabomber’s motivation was to publicly promote a global revolution against industry and technology, which he accomplished in September 1995 when the New York Times and Washington Post published his 50-page manifesto with the understanding that the bomber would cease his terrorist attacks.

On April 3, 1996, FBI agents executed a search warrant on a remote cabin in Lewis and Clark County in Montana and arrested Theodore Kaczynski. Attorney General Janet Reno said the Department of Justice planned to seek the death penalty. The key information came from Kaczynski’s younger brother, David, who found in the manifesto similarities to his sibling’s earlier writings and called the FBI.

A math prodigy admitted to Harvard University at 16, Ted Kaczynski obtained his doctoral degree from the University of Michigan and then taught at the University of California at Berkeley. The academic community was not a good fit for Kaczynski, who retreated to a more isolationist lifestyle in Montana.

Kaczynski’s first homemade bomb in 1978 targeted a Northwestern University engineering professor and injured a campus police officer. His last one in 1995 killed a timber industry lobbyist. 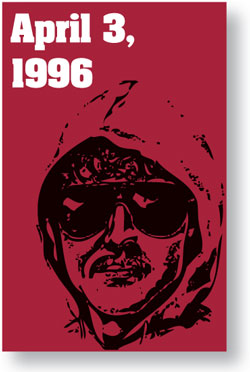 Court-appointed psychiatrists said Kaczynski suffered from schizophrenia, but the Unabomber refused to allow his lawyers to argue that he was insane. In early January 1998, he attempted suicide in jail.

Just days later, lawyers for Kaczynski and prosecutors reached a plea deal in which the Unabomber was sentenced to life in prison. The plea deal was strongly advocated by David Kaczynski, who said he initially cooperated with the understanding his brother would not get the death penalty.

One post-case note: Kaczynski resurfaced in May 2012 when he submitted his biographical information for his 50th class reunion at Harvard. The school printed his submission, in which he lists his occupation as “prisoner” and his awards and accomplishments as “eight life sentences.”