On the morning of May 1, 1960, Gary Powers took off from a base near Peshawar, Pakistan, on what was to be the 24th and final U-2 spy mission over Russia. Powers was 1,300 miles inside Soviet territory and roughly 65,000 feet above a nuclear facility near the industrial town of Sverdlovsk when his plane was downed by a V-750 surface-to-air missile. 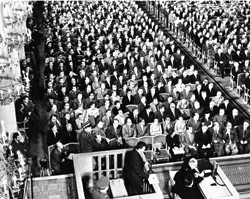 CIA officials quickly realized something had gone awry, but the fate of Powers was unknown. After a week of diplomatic posturing and disinformation from both sides, the Soviets announced that Powers had survived the crash and been captured.

The revelation proved embarrassing to President Dwight D. Eisenhower, who had only grudgingly approved the mission—but he refused to apologize for the incident.

Powers, meanwhile, endured extensive interrogation and was convicted of espionage in an infamous three-day show trial in Moscow’s Hall of Trade Unions (shown above) and sentenced to 10 years’ “deprivation of liberty.”

He served 18 months in prison before he was released in exchange for Russian spy Rudolf Abel—a deal negotiated in part by Abel’s former court-appointed attorney, James Donovan.