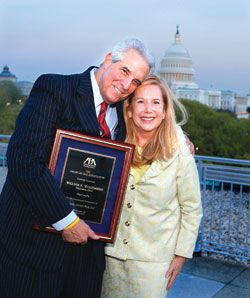 When leaders of the ABA and representatives of other bar associations from around the United States descend on Capitol Hill for a few days every spring, they are all business as they lobby members of Congress on issues of importance to the legal profession and the justice system.

The three-day lobbying event—held April 16-18 this year—helps bar leaders build important relationships with congressional delegations and lays the groundwork for advocacy of ABA policies on Capitol Hill, says Linda A. Klein of Atlanta, who chairs the ABA Day in Washington Planning Committee.

“Like members of Congress, lawyers strive to promote greater understanding of how proposed rules and legislation will affect everyday life,” says Klein, a past chair of the ABA House of Delegates and managing shareholder in the Georgia offices of Baker, Donelson, Bearman, Caldwell & Berkowitz. “That is why lawyers are in a unique position to offer assistance to their representatives.”

The Law Library of Congress offered a rare treat when it opened its collection of rare historical documents to the group for a private display and tour.

ABA Day in Washington is coordinated by the association’s Governmental Affairs Office and co-sponsored by the Section Officers Conference and the Young Lawyers Division, along with the National Conference of Bar Presidents and the National Association of Bar Executives. Now in its 17th year, the event drew more than 350 bar leaders from every state, the District of Columbia and Puerto Rico.

The ABA also presented its Grassroots Advocacy Awards for 2013 to William K. Weisenberg, the assistant executive director for public affairs for the Ohio State Bar Association, who serves on the Standing Committee on Governmental Affairs and the ABA Day Planning Committee; and Kevin L. Shepherd, a partner at the Venable law firm in Baltimore, who has worked to prevent money laundering while protecting the confidentiality of lawyer-client relationships. Shepherd chairs the Task Force on Gatekeeper Regulation and the Profession.

This year’s lobbying efforts focused on these core issues:

The Legal Services Corp. An estimated 61 million low-income individuals are eligible for civil legal assistance funded by Congress through the Legal Services Corp. But the need for civil legal services for low-income individuals is outstripping the resources of 134 legal aid programs with 900 offices across the country that receive funding through the LSC. As a result, more than half of the people applying for legal assistance are not receiving it. Current LSC funding is $358 million, and the ABA is urging Congress to appropriate $430 million in fiscal 2014—the same amount requested by President Barack Obama in his proposed budget.

Judicial vacancies. The ABA is concerned about the number of vacancies on the federal bench and the length of time it takes to fill them. There have been 75-100 vacancies—an average of 10 percent of federal judgeships—for most of the past four years. ABA Day participants urged senators to work with the administration to shorten the time between vacancy and nomination, especially for positions classified as “judicial emergencies.”

Federal court funding. Sequestration has reduced the federal judiciary’s current fiscal year budget by almost $350 million. Courts are imposing layoffs and furloughs on staff—including public defenders—leading to reduced hours at courthouses and deferral of action on cases. The ABA is urging Congress to protect the federal judiciary from future deficit reduction and increase funding for the courts in fiscal 2014 to the 2013 levels from before sequestration.