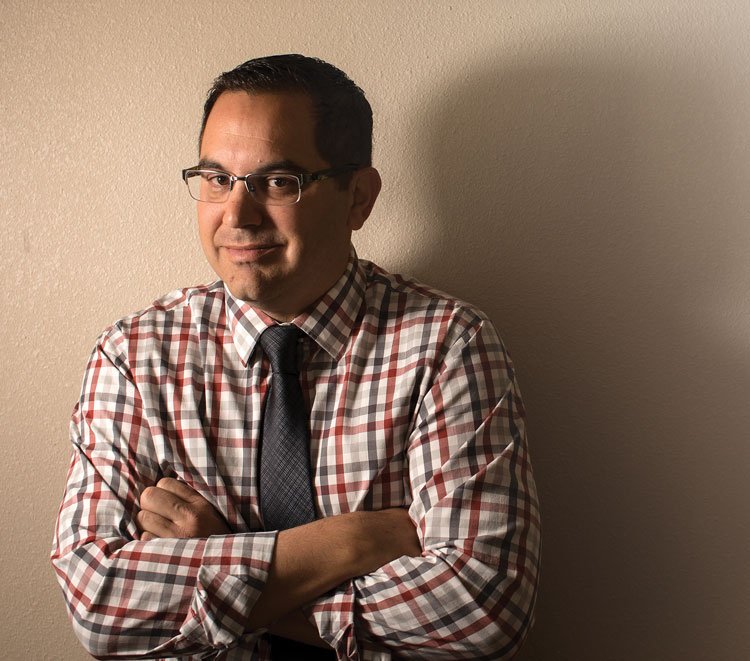 Martin Gauto: “I love what I do. It’s challenging and rewarding, and it has provided a lot of humbling experiences. It gets more challenging every day. But it’s a fight that I’m up for.” Photograph by Earnie Grafton.

Martin Gauto, a senior attorney for Clinic (the Catholic Legal Immigration Network Inc.) in Los Angeles, has represented hundreds of immigrant children who were apprehended at the U.S. border after fleeing abusive situations in countries such as Mexico, Honduras, El Salvador and Guatemala.

They may have been in the country illegally, unaccompanied by a parent or guardian, used for smuggling drugs or forced into human trafficking. As a child of immigrants, Gauto is passionate about helping these young people seek better lives.

“I love what I do,” says Gauto. “It’s challenging and rewarding, and it has provided a lot of humbling experiences. It gets more challenging every day. But it’s a fight that I’m up for.”

Gauto was born in Cincinnati to parents who emigrated from Argentina in the 1970s. His father was a doctor who came to the United States to get medical training and decided to stay. The family later moved to Palm Desert, California.

Gauto earned a bachelor’s degree in political science in 1998 from the University of California at San Diego. Before law school, he worked for a recruitment firm that staffed a warehouse where he encountered a number of employees from across the border in Tijuana, Mexico, with work permits for jobs in the United States. Some would get up at 3 a.m. to get to their shift on time, and Gauto admired their work ethic and determination.

“I knew I wanted to be in public interest law, but this experience set me on the path to focus on immigration,” Gauto says.

In 2006, Gauto earned his law degree at the University of Southern California’s Gould School of Law. After graduation, he briefly worked for the office of public service to help find service opportunities for law students, then started his immigration law career in earnest at Clinic.

A couple of years later, Clinic decided to transfer part of its organization to Catholic Charities of Los Angeles, including the division where Gauto worked, and he became the interim program director and lead immigration attorney for the Esperanza Immigrant Rights Project. But by 2013, he had returned to Clinic and provided training and technical assistance to attorneys nationwide who represent unaccompanied children.

About 26,000 unaccompanied children were apprehended at the U.S. border between October 2017 and April 2018, according to U.S. Customs and Border Protection. Gauto has argued a number of such cases before immigration judges to help keep his clients in a safer environment.

Without the help of Gauto and others at Clinic, those children would need to pay for their own legal representation. Federal statutes do not give them the right to government-funded representation, though the ABA House of Delegates passed a resolution in 2015 urging that this be changed. And the likelihood of the children being successful without a lawyer is practically nil, Gauto says.

In one case, a 14-year-old girl from El Salvador was sold against her will by her mother to a man in the United States. The girl was arrested at the border and later placed in a detention center, where Gauto was enlisted to represent her. She received a special immigrant juvenile visa, which is given to abused, abandoned or neglected children. A state court judge was convinced of the girl’s plight and agreed that she could apply for the visa. Later, the girl was transferred to a foster care home.

In another case, he worked with two teenage girls who left Vietnam to testify against a U.S. serviceman accused of sexually abusing them. Gauto partnered with Immigration and Customs Enforcement and the girls were later placed in foster care. Gauto helped them get U visas because they were victims of crime and were helpful in the prosecution of that crime.

Gauto has not only zealously represented children facing deportation but also was the driving force behind the growth and development of the Esperanza Immigrant Rights Project that has served thousands of young people, says Lindsay Toczylowski, executive director of the Immigrant Defenders Law Center in Los Angeles. She and Gauto have known each other since law school, and they worked together at Clinic.

Now Gauto provides training, technical assistance and consultation to new lawyers so they can help even more immigrant children.

“In his current position with Clinic, Martin is able to do one of the things he does best—mentoring attorneys—on a large scale with many young lawyers across the country,”  Toczylowski says. “To say the least, Martin’s work has had a big impact on the movement to ensure access to high-quality representation for immigrant youth facing deportation, and I admire his determination and commitment to social justice.”

In 2016, Gauto joined the Children’s Rights Litigation Committee of the ABA Section of Litigation. He says he believes that under the current presidential administration, immigrant children are in jeopardy. He worked with the committee to draft ABA policy calling for the presentation and development of laws, regulations and procedures that protect due process and create other safeguards for immigrant and asylum-seeking children.

This article was published in the July 2018 ABA Journal magazine with the title "Accompanying Minors: California attorney devotes his career to helping children navigate immigration courts."