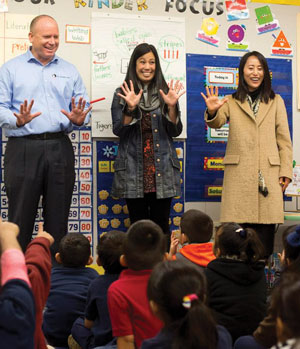 Marty Burbank, left, and his wife, Seon Chun-Burbank, right, help Tessa Ashton teach the letter of the day to her kindergarten class at Anaheim’s Rio Vista Elementary School. Photograph by Drew A. Kelley.

Elder law attorney Marty Burbank knows all about planning charitable donations. But when he pledged to fund the college educations of 27 kindergartners in Anaheim, California, he says, "it just kinda came to me."

Burbank does volunteer work through a church at Rio Vista Elementary School in Anaheim. One day last year, while dropping off supplies with kindergarten teacher Tessa Ashton, he spotted college banners at the school. Ashton explained that it was part of a schoolwide effort to make students enthusiastic about college.

Rio Vista serves a low-income neighborhood, and many of the students’ parents don’t have the financial means to send their kids to college. That struck a chord with Burbank, who had recently heard a sermon about charity and sacrifice. Though he and his wife had given before, it had never felt like a sacrifice.

So they took the plunge and pledged to fund four years of higher education (plus books) at a California state school for each of Ashton’s students. In return, the kids must check in with the Burbanks once a year, with a picture or an essay about what college means to them and their families. Burbank says this is to keep them thinking about college as a goal.

He also thought the gift would help the parents encourage the kids to work hard to get into college. And, he says, it looks like that’s already the case: At a meeting earlier this year, several of the parents were openly crying.

Burbank used his legal skills to structure the gift as a donor-advised fund, a kind of a savings account for charity. Funding it means the Burbanks won’t buy a boat as they originally had planned and will cut back on other avoidable spending. More importantly, it means they won’t retire for another 20 years or so.

“None of the gifts we made to charities before ever really caused us to change our lifestyle much,” he says. “This one definitely does.”

Marty Burbank talks to Meredith Vieira about his gift.

This article originally appeared in the June 2016 issue of the ABA Journal with this headline: “Unplanned Giving: A California lawyer pledges to fund college for 27 kindergartners.”