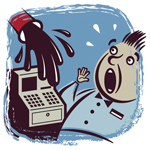 In August, Natalie Walters, 39, of Orofino, Idaho, was getting her usual fill-up of soda in the cafeteria at the Veterans Affairs Medi­cal Center in Boise while her father had a medical appointment.

Walters—who describes her status as “retired/disabled”—carries her own 52-ounce mug and says she was never charged more than $1.50. But when a new cashier showed up, the numbers changed.

After some back and forth with the cashier and the manager, Walters said, “Here, you can have your soda back.” She says that she attempted to pour the drink into a trash can be­hind the counter, but that much of it splashed onto the counter and floor.

Roger Banks, chief of police at the facility, says a surveillance videotape indicates that the drink was poured on the counter, creating an effervescent mess.

Walters was banned from the cafeteria and figured that was that. But four days later, she says, her mother was questioned by Banks at the hospital. Walters claims her father’s med­ical records were illegally accessed to find his next appointment, at which time Banks could approach her about the incident.

Banks acknowledges that Walters’ father’s information was obtained from his medical file but says he is granted “restricted patient inquiry rights” when acting in his official capacity.

“There were no patient privacy violations at all,” Banks says. “I don’t know anything about his medical condition or any­thing else.”

Banks tracked Walters down at a motel and asked her for iden­tification. When she refused, Banks consulted with the district at­torney’s office.

Walters was charged with larceny and disturbing the peace, which carry maximum pen­alties of six months in federal prison.

“I tried to work with her,” Banks says. “She wouldn’t work with me. She left me no choice.”

Walters negotiated with the district at­tor­ney’s office and was able to get the larceny charge dropped; she paid a fine of $200 in October.

Banks insists he was right in pursuing charges against Walters. “We have a job to do here,” he says. “If you don’t enforce rules and regu­lations, you have complete chaos.”

Walters’ father is pursuing legal action “because they went through his medical records and they ha­rassed him,” she says.

“I think this was a waste of fed­eral government money,” she says. “A marshal had to travel over 200 miles to serve me. Over spilled soda? If I had committed murder, maybe. It’s just ridiculous.”