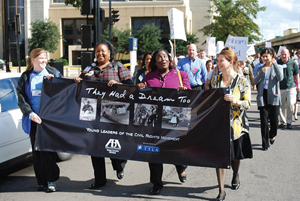 It probably comes as no surprise that the youth of today know little about the civil rights movement: the 1963 “children’s crusade” in Birmingham, Ala., or the desegregration of Little Rock Central High School in Arkansas or the role played by a 15-year-old African-American girl.

But the leaders of the ABA’s Young Lawyers Division want today’s young people to learn about children in history. Last year, as its annual service project, the division launched They Had a Dream Too: Young Leaders of the Civil Rights Movement. The initiative is designed to teach high school students and others about the historic steps that children have taken to change history and change the law.

To kick off They Had a Dream Too, lawyers who attended the division’s annual meeting in October in Birmingham re-created the historic children’s march.

The ABA’s project grew out of one begun by the Texas Young Lawyers Association in 2006. The Texas program was designed to develop curriculum for teaching civil rights in schools. It highlights little-known heroes, such as 15-year-old Claudette Colvin, who refused to give up her seat on a Montgomery bus and was one of Rosa Parks’ inspirations.

The Texas program, which includes a 28-minute They Had a Dream Too film, was intended as a resource for educators of 11th- and 12th-grade students. But Kelly-Ann Clarke of Galveston, chair of the YLD, says it has been used in classrooms of younger grades, and those children have found the material compelling. “We think the film is a catalyst to show if you believe in something, sometimes you can have the effect of changing the law,” she says.

As part of the YLD initiative, volunteers are available to discuss with students some of the legal issues raised in the film.