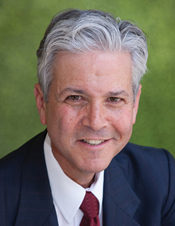 You begin to suspect that Ross E. Mitchell is a different sort of professional when he men­tions his patented JetLag watch, which gradually adjusts to the cor­rect time during flight to lessen the jolt of changing time zones.

While not a commercial success, his invention led to a stint directing a fatigue-measurement project to improve alertness for Canadian locomotive engineers.

“The way I approach my life and career is not with a master plan,” says the 57-year-old computer software consultant/attorney. “Things grab me and I become very passionate about them.

Mitchell, who is from West Newton, Mass., demonstrated that ardor this summer when he became the first graduate of an online-only school to be admitted to the Mas­sachu­setts bar. Like most states (except California), Mas­s­­­achusetts requires graduation from an ABA-accredited school, and online JD programs don’t qualify under current ABA standards.

Mitchell knew this when he enrolled in 2000 in Kaplan University’s Concord Law School, but the school’s flexibility permitted him to continue consulting. It also allowed him to complete his undergraduate degree before earning his JD in 2004. Massachusetts initially denied Mitchell’s request, but he persevered. Last fall, he argued before the Supreme Ju­dicial Court that the ABA-accreditation requirement violated the equal protection clause. In a 6-1 decision, the court didn’t get to the merits of his argument, instead noting the “commendable quality” of his pro se briefs and oral argument.

He passed the exam on his first try.