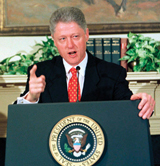 William Jefferson Clinton had barely taken office before his administration was rocked with allegations of malfeasance. Political flaps with names like Filegate and Travelgate flamed, then fizzled. In 1994, under pressure from congressional Republicans, Attorney General Janet Reno appointed outside counsel to review Clinton’s investment in a failed Arkansas resort known as Whitewater. When Reno’s impartiality was questioned, a three-judge panel authorized former federal judge Kenneth Starr to take over the investigation.

When allegations of Clinton’s yearlong affair with a White House intern became public, Starr asked that his investigation be expanded. In September 1998, Starr released a titillating, 445-page document detailing the affair and allegations that Clinton had lied—both to the public and under oath in an Arkansas lawsuit.

In December, for only the second time in history, the House of Representatives approved articles of impeachment against a sitting U.S. president. On Feb. 12, 1999, Clinton was acquitted by the Senate on charges of perjury and obstruction of justice.