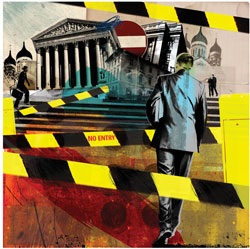 The ABA Commission on Ethics 20/20 has submitted recommendations to the association’s policymaking House of Delegates that would make it easier for foreign lawyers to obtain limited authority to practice in U.S. jurisdictions.

The commission also has decided that it will not submit a recommendation on a question at the fringes of the topic of nonlawyer ownership of law firms—a potential hot-button issue for some members of the House.

Specifically, that proposal would have revised a comment to Rule 1.5 of the ABA Model Rules of Professional Conduct to assert that—subject to provisions in Rule 5.4 (Professional Independence of a Lawyer)—it is permissible for a lawyer in a jurisdiction that prohibits nonlawyer ownership of law firms or sharing fees with nonlawyers to divide a fee with a lawyer at a firm in another jurisdiction that does permit law firms to have nonlawyer owners or that allows them to share fees with nonlawyers.

Instead, the commission is referring the fee division issue to the Standing Committee on Ethics and Professional Responsibility, which is empowered to write formal ethics opinions for the ABA that interpret the Model Rules. In September, the commission referred to the ethics committee the question of whether fee-sharing among lawyers in a single firm is permissible under Model Rule 8.5 when the rules applicable to one of the firm’s offices permit nonlawyer owners and the rules applicable to another of the firm’s offices do not. In April, the commission decided not to develop a proposal on whether nonlawyers should be allowed to have some form of limited ownership interest in U.S. law firms.

After the House approved a series of its recommendations in August during the 2012 ABA Annual Meeting in Chicago, the commission settled on its final set of recommendations in late October during a two-day meeting in Washington, D.C. The commission submitted those resolutions and supporting reports on Nov. 14, the filing deadline for resolutions to be considered as part of the House’s regular agenda when it convenes in February during the association’s 2013 midyear meeting in Dallas.

The authority to divide fees between lawyers in two independent firms currently exists in Model Rule 1.5, the commission concluded. “We noted, however, that there would be very few occasions for lawyers to make use of that authority, as two firms can send separate invoices to the client for their work in the matter in most instances,” the commission states in its overview report to the House.

The commission is co-chaired by Jamie S. Gorelick, a partner at Wilmer Cutler Pickering Hale and Dorr in Washington, D.C., and Michael Traynor of Berkeley, Calif., a past president of the American Law Institute. The commission has been working since 2009 to study the impact of technology and globalization on the legal profession, and to propose possible revisions to the Model Rules of Professional Conduct and related standards for lawyers where appropriate.

“We have used our best judgment as to which issues are worthy of debate and consideration in the House and capable of making a difference for the profession,” states the commission’s report to the House. “Given the time and energy that will be appropriate for the House and for commissioners to spend on the important issues before the House in February 2013, the commission decided not to proceed with the proposed change to Rule 1.5.”

In a lengthy discussion about those priorities during the meeting in Washington, commission members took into account the possibility that opposition in the House to even narrow measures that might be viewed as an effort to endorse nonlawyer ownership could dominate consideration of other measures that the commission considers more important. The commission got a dose of that in August, when the House engaged in a lengthy and contentious debate before voting to postpone indefinitely a resolution co-sponsored by the Illinois State Bar Association and the ABA Senior Lawyers Division, which called for the House to reaffirm policy originally adopted in 2000 stating that nonlawyers should not have an ownership role in law firms and should not share legal fees with lawyers, and to oppose any proposals to revise those prohibitions. The sponsors made it clear that their resolution was aimed at the work of the commission.

“We set our priorities in the decisions we made today,” said Gorelick in an interview with the ABA Journal after the commission adjourned its meeting in October. Emphasizing that the fee division issue is a narrow one that can be addressed in other ways, she said, “We did not feel it was worth spending time and energy on that because it’s a distraction from our most important remaining proposals” relating to foreign lawyers practicing in the United States.

The commission’s recommendations to the House relating to “inbound” foreign lawyers reflect the growing impact of globalization.

“One important practical effect of globalization is that clients regularly expect lawyers in firms of all sizes to handle matters that involve multiple jurisdictions, domestic and international,” states the commission in its overview report. This pattern is occurring in cases involving individuals as well as businesses, states the commission, which notes that its recommendations reflect policies that already have been adopted by a number of jurisdictions in the United States.

One of the proposals (PDF) would apply Model Rule 5.5(d) to qualified foreign lawyers. In its current version, the rule permits a lawyer admitted in one U.S. jurisdiction to provide legal services in another jurisdiction where the lawyer is not admitted to practice if those services are provided to the lawyer’s employer or its organizational affiliates, and are not services for which the second jurisdiction requires pro hac vice admission. The amendments essentially would extend the application of Model Rule 5.5(d) to a foreign lawyer who is a member in good standing of a recognized legal profession in a foreign jurisdiction whose members are admitted to practice. In addition, the foreign lawyer would be allowed to advise a client on U.S. law only in consultation with an American lawyer.

A second proposal (PDF) would amend the ABA Model Rule for Registration of In-House Counsel to include foreign lawyers working in the United States, subject to certain restrictions.

A third proposal would add a new section to the ABA Model Rule on Pro Hac Vice Admission to allow state courts or agencies to, at their discretion, admit a foreign lawyer in a particular proceeding as co-counsel with an in-state lawyer, or to serve in an advisory or consultative role in that proceeding. But the in-state lawyer would be responsible for the conduct of the proceeding and for independently advising the client on substantive law in the U.S. jurisdiction as well as procedural issues. The current version of the rule applies only to lawyers admitted to practice in U.S. jurisdictions.

“Lawyers can no longer assume that their practices will be contained by national borders,” states the commission’s summary report. “Lawyers in all practice settings, from solo practitioners handling divorces for foreign-born clients to law firms handling international business transactions, may encounter work that involves or relates to the law of other nations.” More clients expect lawyers to advise them on both domestic and foreign issues.