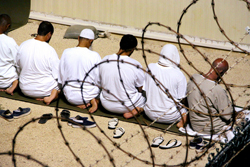 The ABA has been engaged in the legal debate overhow to deal with terrorist suspects since the earliest days after the attacks on Sept. 11, 2001.

The ABA’s first response to the attacks, which destroyed the World Trade Center in New York City, severely damaged the Pentagon in Washington, D.C., and took the lives of nearly 3,000 people, was to help organize legal services efforts on behalf of victims, their families and members of the military services.

By early 2002, however, the association’s policy concerns focused largely on the operation of military commissions created by the Bush administration to hold trials of suspected terrorists and the opening of a detention facility at the United States military installation at Guantanamo Bay, Cuba.

Over the next several years the ABA spoke out against indefinite detention of terrorist suspects without habeas corpus proceedings, and it argued that people accused of terrorist acts should be tried in courts offering adequate procedural protections.

Now, more than eight years after the 9/11 attacks, government policy has begun to shift significantly closer to the positions advanced by the ABA, other legal organizations and human rights advocacy groups.

“There has been substantial movement toward policies advocated by the ABA” and other legal groups, “and that’s gratifying,” says Neal R. Sonnett of Miami, who chairs the association’s Task Force on Treatment of Enemy Combatants. “The policies of the ABA and other groups have had an impact.”

Stephen A. Saltzburg, a professor at George Washington University Law School in Washington, D.C., says several groups helped nudge the government’s policy shift. He cites criticism of U.S. detainee policy from other nations as one factor. Some key rulings by the U.S. Supreme Court asserting habeas rights of detainees constitute another factor. And, says Saltzburg, a past chair of the ABA Criminal Justice Section who now serves on the Section of Litigation council, “A substantial chunk of the American population is not happy with these commissions.”

There is little question, however, that the key factor was the election of Barack Obama as president. His administration’s perspective has been more in accord with views expressed by the ABA and other legal groups than the Bush administration.

“It’s clear this administration was very thorough in its evaluations of how to pursue trials of terrorists,” says Harvey Rishikof, a professor at the National War College in Washington, D.C., who chairs the ABA Standing Committee on Law and National Security.

Shortly after taking office in January 2009, Obama ordered that military commission trials be halted and that plans get under way to close the Guantanamo Bay prison by the end of the year. During a speech in May, Obama said a combination of civilian courts created under Article III of the Constitution and military commissions might be used for detainee trials. In October, Congress added a number of procedural safeguards to the commissions when it passed the Military Commissions Act of 2009.

The practical impact of the new policy was made apparent on Nov. 13, when U.S. Attorney General Eric Holder and Secretary of Defense Robert M. Gates announced plans to try some key terrorist suspects in U.S. district court and others before military commissions. All the defendants, who are being held at Guantanamo, were originally charged in the commissions.

Five defendants charged with conspiring to commit the Sept. 11 terror attacks are to be tried in the U.S. District Court for the Southern District of New York, whose courthouse is only blocks from the site of the World Trade Center. The defendants, including Khalid Sheikh Mohammed, the self-proclaimed mastermind of the attacks, will be housed in a federal detention facility in New York during the trial, which could last months.

The five defendants slated for trial by military commissions include Abd al-Rahim al-Nashiri, who is charged with planning the 2000 attack on the USS Cole in which 17 American sailors died.

In his statement outlining plans for these trials, Holder also signaled the administration’s intention to keep its options open in deciding on trial forums for other detainees depending on the circumstances of each case.

“Just as a sustained campaign against terrorism requires a combination of intelligence, law enforcement and military operations,” Holder said, “so must our legal efforts to bring terrorists to justice involve both federal courts and reformed military commissions.”

Meanwhile, federal district judges have been assigned to hear habeas petitions by some of the 215 detainees still being held at Guantanamo while the administration deliberates over how to close the facility and where to send those still being held there. The security law committee has created a database to track the cases.

ABA President Carolyn B. Lamm sent a letter (PDF) to Holder on Nov. 25 endorsing the decision to try the 9/11 suspects in federal court.

“Those who plotted the terrorist attacks against the United States must be brought to justice and held fully accountable for their horrific crimes,” wrote Lamm, a partner at White & Case in Washington, D.C. “However, no matter how heinous the charges, the long-awaited trials of these alleged terrorists must be both fair and perceived as fair, or the resulting verdicts will not be recognized as legitimate.” Military commissions, she wrote, “would have failed to provide the credibility that is essential to acceptance of any final verdict.”

Lamm’s letter reflects a policy statement on the detainee issue that was adopted in February 2009 by the ABA House of Delegates. In a voice vote, the House adopted a recommendation by the New York State Bar Association that calls for all detainees to be prosecuted in Article III federal courts unless the attorney general certifies in cases involving recognized war crimes that prosecution must take place in other courts that incorporate fundamental rules of due process, provisions of international law and the Uniform Code of Military Justice. The policy also calls for all individuals being held at Guantanamo to be granted prompt habeas corpus hearings.

The debate over how the legal system should deal with terrorism suspects is far from over. The key issue is whether there is a place for trials both in the federal court system and before military commissions. Views are mixed within the ABA and the wider legal community.

Many observers have warned that the trials may raise security concerns, and that defendants will attempt to use them as forums to highlight their political beliefs and criticize the U.S. justice system.

“We’ll have to wait and see how the trials play out in New York,” says Rishikof, whose committee has published a series of reports analyzing legal issues relating to treatment of terrorism detainees. “The proof will be in the pudding.”

At the same time, he says, using military commissions and federal courts raises concerns because “one never wants to create the image that military justice is somehow second-rate.”

Sonnett is more certain about what course should be followed. “The commission system has been broken since it was created in 2004,” says the chair of the enemy combatants task force. “The federal courts are more than capable of handling all these cases.”

As for possible disruptions in court, Sonnett says, “Does anybody remember what Moussaoui said in court? That’s already faded into the background, as he has.”