Congress should bolster jurisdiction of tribal courts over violence against children, ABA urges 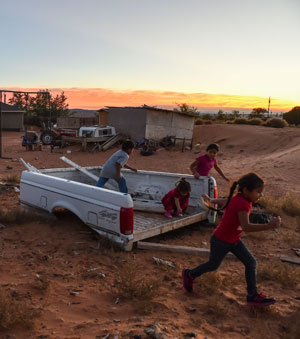 The ABA is urging Congress to follow the recommendations of recent reports by the U.S. Justice Department and the Indian Law and Order Commission that call for giving American Indian and Alaska Native tribes more authority to exercise criminal jurisdiction and apply their own remedies in cases that occur on tribal lands, especially when they involve children.

The uniquely challenging issues facing these communities were identified in the report titled Ending Violence So Children Can Thrive, issued in November 2014 by the Attorney General’s Advisory Committee on American Indian/Alaska Native Children Exposed to Violence.

U.S. Senate Indian Affairs Committee Chairman John Barrasso, a Wyoming Republican who became chair of the committee in January, has designated criminal and juvenile justice issues as priorities for the committee, which held hearings during the summer. A July hearing focused on troubling findings that Native American youths experience violent crime at rates of up to 10 times the national average, are overrepresented in both federal and state juvenile justice systems, receive harsher sentences than other juveniles, and are not receiving the services needed to rehabilitate them or to prevent recidivism.

The committee is giving particular attention to the challenges facing Alaska Native tribes, where the problem of violence affecting children is compounded by circumstances unique to that state and its native communities. A hearing held in Alaska and chaired by one of that state’s senators, Republican Lisa Murkowski, focused specifically on those issues.

The ABA “is grateful that Congress has recognized the uniquely challenging AI/AN juvenile justice and AN justice issues by holding these recent hearings,” says Jerry Gardner, executive director of the Tribal Law and Policy Institute in West Hollywood, California, and a special adviser to the Native American Concerns Committee of the Section of Civil Rights and Social Justice (formerly the Section of Individual Rights and Responsibilities). Gardner emphasized that the Justice Department report, along with ILOC’s 2013 report, A Roadmap for Making Native America Safer, found that “tribes are best positioned to provide effective criminal systems in Indian country and thereby curb the current high levels of violence and its ill effects on American Indian and Alaska Native children.”

Gardner expresses the hope that Congress will follow up on the Senate hearings with action “in keeping with the roadmap—endorsed by the ABA—laid out in these important reports. Tribes must be empowered to address the issues, barriers that currently impede tribal authority must be removed, and tribes must be provided with the necessary resources.”

In August, the ABA’s policymaking House of Delegates approved a resolution by the section urging implementation of recommendations in the report by the attorney general’s advisory committee that would give tribes full criminal jurisdiction over all people who commit crimes against American Indian and Alaska Native children in Indian country and implement steps to strengthen tribal criminal justice systems. In February, the House had also endorsed recommendations in the ILOC report.

“Native youth are among the most vulnerable group of children in the United States as a result of centuries of harmful public policies that continue to inflict intergenerational trauma on children in Indian country,” said Thomas M. Susman, director of the ABA’s Governmental Affairs Office, in comments submitted to the Senate Indian Affairs Committee.

“The development, enhancement and sustainment of Alaska tribal courts, and truly cooperative relationships between the state of Alaska and Alaska Native tribes, are required to reduce violent crime and protect Alaska Native children from exposure to violence,” Susman said.

This article originally appeared in the November 2015 issue of the ABA Journal with this headline: “Children’s Crusade: The ABA is urging Congress to bolster the jurisdiction of tribal courts over cases involving violence against minors.”