Court May Make It Easier to Invalidate an Invention 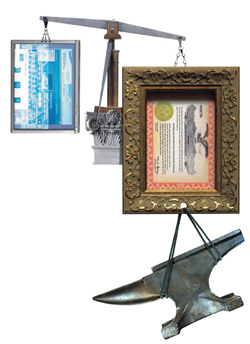 The small software firm i4i limited Partnership punches above its weight. Its clients include heavyweights like Amgen, Bayer, Biogen Idec, Warner Chilcott, Merck and Novo Nordisk. But the Toronto-based firm may have landed its biggest blow in 2009, when the company successfully sued Microsoft for patent infringement and won a $240 million award. With interest, the award is at least $290 million.

However, i4i’s fight with Microsoft is far from over. The software giant has brought the tussle all the way to the U.S. Supreme Court, which will hear oral arguments in Microsoft Corp. v. i4i Limited Partnership on April 18. Chief Justice John G. Roberts Jr. owns Microsoft stock, and he has recused himself from the case.

For Microsoft, there’s far more at stake than several hundred million dollars. There’s a major legal issue: To what extent should patents be presumed valid? The company has been trying for years to get the Supreme Court to rule on this issue, and it appears the company is on the brink of success.

“This is a very important case,” says Los Angeles attorney Glenn W. Trost. “The Supreme Court, for the first time, is going to squarely address the quantum of proof needed to establish the invalidity of a patent in patent litigation.”

“The current rule places a huge thumb on the scale in favor of invalid patents. Often even invalid patents will be sustained under this heightened standard of proof,” says Thomas G. Hungar, a Washington, D.C., attorney who represents Microsoft in the lawsuit.

Many observers expect the Supreme Court will reject the current bright-line rule and, at least under some circumstances, make it easier for parties to attack the validity of patents. If that occurs, “it would have a tremendous effect. It would have implications for patent owners, district courts, the [U.S. Court of Appeals for the] Federal Circuit and the patent office,” says Donald R. Dunner, a D.C. attorney who has represented i4i in this lawsuit and is a former chair of the ABA’s Intellectual Property Law Section.

Section 282 of the Patent Act states that “a patent shall be presumed valid.” But the statute provides no guidance on how strong the presumption should be.

Prior to the creation of the Federal Circuit in 1982, the regional circuits adopted a flexible standard for this presumption. If a patent was attacked on the basis of evidence that previously had been considered by the Patent and Trademark Office, the courts would defer to the PTO’s expertise and uphold the patent unless there was clear and convincing evidence of invalidity.

If, on the other hand, a patent was attacked on the basis of new evidence, not previously considered by the PTO, the courts allowed the patent to be found invalid on a mere preponderance of evidence.

That flexibility ended in 1983, when the Federal Circuit handed down its decision in Connell v. Sears, Roebuck & Co. The court proclaimed that the clear and convincing standard applied even to evidence that was not previously considered by the PTO.

The PTO has never considered the evidence of invalidity now being asserted by Microsoft. The software giant argues that, more than one year before i4i’s patent application, its predecessor firm sold software containing the invention in the patent application. If Microsoft could prove this, i4i’s patent would be struck down for violating the on-sale bar.

There is scant evidence on this issue, so it is unsurprising that the PTO did not consider the matter when it granted the patent. And the agency could not consider the issue when it later re-examined the patent at Microsoft’s request. “Re-examination is available only for certain limited grounds, but the on-sale bar isn’t one of them,” Hungar says.

The only way Microsoft could raise the issue was in court. However, the district judge ruled that the software giant had to prove its case by clear and convincing evidence, and the jury determined that Microsoft had not met this tough standard. On appeal, the Federal Circuit upheld the lower court’s actions. Now the issue of the presumption of validity is before the Supreme Court.

The bright-line rule that the Federal Circuit adopted in Connell will probably be struck down, according to many experts. They note that in recent years, the high court repeatedly has evinced its dislike of inflexible patent law rules created by the Federal Circuit.

“Every time over the past decade a petitioner has argued there is a bright-line rule, the Supreme Court has struck it down,” says D.C. attorney Paul Devinsky. “These bright-line rules don’t survive.”

The high court addressed the issue of patent validity, albeit in dicta, in 2007. Justice Anthony M. Kennedy, writing for a unanimous court in KSR International Co. v. Teleflex Inc., stated that because the PTO had not reviewed evidence of a patent’s alleged invalidity, “the rationale underlying the presumption [of validity]—that the PTO, in its expertise, has approved the claim—seems much diminished here.”

If the Supreme Court accedes to Microsoft’s request and removes the clear and convincing standard for evidence of invalidity not considered by the PTO, existing patents will become weaker and more vulnerable to attack. “The value of patents will be depreciated contrary to the reasonable expectations of patent owners,” Dunner says.

This may make businesses less willing to invest in R&D. “A strong patent system helps technology and innovation. It makes people want to fund new ideas. When you start changing that system and possibly weakening it, I don’t see how that is good for the U.S.,” says New York City attorney Marylee Jenkins, who now chairs the ABA Intellectual Property Law Section.

On the other hand, weakening some patents might be helpful. Nonpracticing entities, sometimes called “patent trolls,” make money by licensing their patents and suing those who refuse to pay for licenses. The patents asserted by these firms are often dubious, but alleged infringers frequently have paid up because the presumption of validity was so hard to overcome.

If the presumption of validity is lowered, however, litigating against these patents becomes a more realistic option. “Courts would be more willing to grant summary judgment [on invalidity]; and at trial, juries would no longer feel compelled to uphold dubious patents,” Hungar says.

“It will make it easier to fight patent trolls,” says Jenkins.

Lowering the presumption of validity—for only some evidence—would complicate patent litigation. If a lawsuit concerns evidence of invalidity that was previously considered by the PTO and other evidence that had not been reviewed by the agency, the judge and jury will need to apply two different presumptions of validity. That could create confusion.

“The court will need to tell the jury that this evidence of invalidity is under the clear and convincing standard, and this other evidence is under just a preponderance standard. I think juries will get very tentative when confronted with this,” says Hans Sauer, associate general counsel for intellectual property at the Biotechnology Industry Organization, a trade group representing biotech firms.

Patent prosecutions are likely to become longer and more expensive. That’s because applicants will provide the PTO with all possible evidence affecting validity, so the resulting patents can receive the broadest protection under the clear and convincing standard. “The patent office will be flooded with prior art by applicants who, in an excess of caution, will submit anything that is tangentially related to their claims,” Dunner says. “This will only exacerbate the backlog of patent applications.”

Because the case has attracted a great deal of attention, numerous businesses and legal organizations are expected to submit amicus briefs. The ABA, however, will not do so because ABA sections have differing views on the case.

“The fear was that it would be difficult to get a position everyone could agree on, so the IP Law Section decided not to adopt a position on this case,” says New York City lawyer Samson Helfgott, a council member of the ABA’s Intellectual Property Law Section.