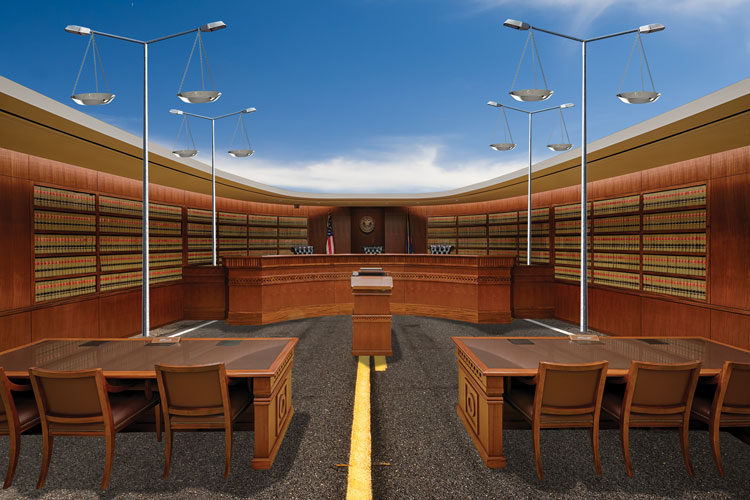 Every other Wednesday morning at the Denver Rescue Mission’s Lawrence Street Shelter, dozens of homeless people stand in line waiting to write their names on a sign-up sheet.

But they’re not looking for a place to stay. They’re signing up to have outstanding court cases heard that morning in a room where a folding table functions as a judicial bench and Bibles fill the bookshelves.

Like many specialty courts around the country—teen courts, girls’ courts, veterans’ courts—Denver’s Outreach Court aims to serve a specific population and reduce their interactions with the justice system. Like many courts focused on those experiencing homelessness, the Denver court goes to where defendants gather. In the Mile-High City, court is held at one of the city’s largest, most centrally located shelters.

“We wanted to serve the homeless population in efficient numbers and cut down on failure-to-appear rates,” says Magistrate James Zobel, who oversees Outreach Court.

For homeless people, having an open case causes several problems. “You can’t get housing. You even are excluded for special programs for people dealing with homelessness. You can’t get a proper ID—and you need that to get health care,” Zobel says. “It’s depressing for the people who have these pending cases, and they make them feel not good about themselves.”

Denver’s move is one of the latest examples of programs that have sprouted up around the country, making courts more accessible to homeless people who face lower-level misdemeanor charges.

The movement began in San Diego in the late 1980s when then-public defender Steve Binder visited Stand Down, an annual event held by Veterans Village of San Diego for homeless veterans. One in five told him their greatest need was to resolve outstanding bench warrants.

At the 1989 Stand Down event, Binder helped bring about the first San Diego Superior Court session to be held in a tent on a handball court. “We thought we’d give it a try for one day that weekend. We would then resolve their cases and work to reintegrate them into society,” says Binder, who retired from the court this year. “It was well worth the effort.”

In fact, the line of those looking to have their cases heard spilled out from the tent. The Homeless Court returned to the veterans’ event the following year. Over the past 30 years, Homeless Court has grown, held monthly at various locations around San Diego.

Before Denver’s Outreach Court launched in December 2016, the city’s Homeless Court was held at the Denver City and County Building. Only those who had been referred by a social worker could have their cases heard. However, about 50 percent of the defendants did not make their court dates.

In 2016, a partnership including Denver County Court, the Denver Sheriff Department, the Denver City Attorney’s Office, Denver’s Office of the Municipal Public Defender and the mission researched the specific challenges homeless people face to get to court.

“We found many people had no money for public transportation, and in fact some had encountered a problem on a city bus or train and been kicked off,” Zobel says. “Other people were disabled. And many had nowhere to store documents with court dates and summons. Many are afraid of entering the building. Or they don’t have a calendar.”

Like in San Diego, Denver’s program moved into a location where many people already receive services—the mission. The name was changed to emphasize the opportunity instead of the defendant’s misfortune, Zobel says. In addition, the court aims to establish triage processes to find health care services for those in need.

“There are people in the margins. They are struggling with different things—mental illness, addictions, homelessness,” says Alexxa Gagner, the mission’s director of public relations.

“Anyone can come in on any date, and they will be added onto that day’s docket,” Zobel says. The number of people appearing before the magistrate on any given Outreach Court date can range from 30 to 138, he added.

This approach differs from the American Bar Association’s manual of best practices for developing homeless courts, written by Binder. That model requires defendants to meet with caseworkers and receive certificates proving their commitment to improve their life situation—staying sober, using job training resources, receiving mental or physical health treatment—before going to court to ensure the defendant is on the right track. The ABA model is used in about 70 locations around the country, says Binder, now special adviser to the ABA Commission on Homelessness and Poverty.

At check-in at the Denver Rescue Mission, a clerk runs the person’s name and birthdate though a computer to locate all pending cases. Every case will be added onto that day’s docket.

“Mostly, the charges are low-level—public consumption of alcohol, trespassing, sleeping in a doorway, park curfew violations, urinating in public,” Zobel says. “While certainly these are crimes, those are the types of things that occur because people have nowhere to live.”

Felony cases that involve victims—robbery, assault—are sent on to the courthouse.

“We are not here to try involved legal arguments,” says Mattson Smith, a criminal defense attorney contracted by the public defender’s office in Denver. “It is designed to be simple, and thankfully it is.”

“At Denver Rescue Mission, our ultimate goal is to meet people at the physical and spiritual points of need and help them become self-sufficient. This is a small piece of the puzzle,” Gagner says.

If someone is rightfully accused and willing to plead guilty, they will not be given fines that they can’t pay, but they will receive two to 20 hours of community service.

“We never jail anyone at Outreach Court,” Zobel says. About six defendants are taken by Sheriff Community Work Program representatives that day to start working off their service hours—picking up trash, cleaning up graffiti or helping elderly people shovel their snow.

ABA best practices, however, do not call for community service in sentencing. Instead, jail time and fines are replaced with participation in life skills or addiction counseling and meetings, computer or English literacy classes, or job training and employment searches.

As of July 31, 2018, Outreach Court had heard 1,768 cases, helping 267 homeless people clear their records. It was so successful that the Homeless Court closed the same month Outreach Court launched.

“There has been overwhelmingly positive feedback for clients coming through the system,” Smith says. “Often, we see their burdens lifted, we see a sense of relief. It is gratifying work to do, seeing how it helps them focus on how to get themselves back on their feet and being a contributing, tax-paying community member of society.”

In 2017, Outreach Court had a $124,000 budget. Zobel estimates Denver City and County saved about $235,000 with this program. “If someone is arrested, there are costs that come up: the cost of the warrant and arrest, police officer time, booking time in jail. We estimate that to be $695 per arrest,” Zobel says. “The cost of a jail bed for 24 hours is $70.20. Every time we clear a warrant without having to make an arrest, that money is saved.” In addition, holding open a docket with so many no-shows wasted money.

According to the ABA homeless court program manual, recidivism is much lower, and from 80 percent to 90 percent of the cases are dismissed.

“There is a human piece to this. Individuals don’t need to have more contact with the justice system. Here they are treated with respect. Everyone says thank you for coming. It is a very different environment, and yet they still have consequences, and the decision is rendered right then,” says Nikole Bruns, interim executive director of the City and County of Denver’s Office of Behavioral Health Strategies.

There is talk of adding more outreach courts in different geographic areas of the city. “But it is very difficult to set up an offsite court,” Zobel says.

Officials from neighboring Colorado towns of Aurora and Westminster have come to observe Outreach Court.

“I would love to see this model spread throughout Colorado,” Smith says. “Homelessness is not something that just exists in the city, but in the suburbs and rural areas as well. The model of getting someone out of the system and connected to services would be fantastic to expand on. It is special and successful.”

This article was published in the November 2018 ABA Journal magazine with the title “Home(less) Court Advantage.”