Book Offers a Survey of the Past Decade in Courthouse Design 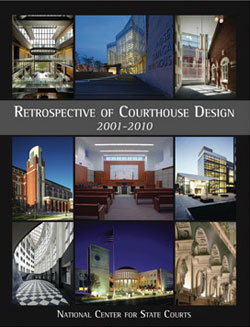 When it comes to courthouse design, there’s been a shift in attitude. That’s the finding behind the National Center for State Court’s new Retrospective of Courthouse Design: 2001-2010. The book features 94 courthouses designed in the last 10 years and is the third in a series published each decade.

The Williamsburg, Va.-based NCSC found that today’s courthouses are designed to affirm transparency and openness, and “reject the architecture of fear,” according to Project Director Chang Ming Yeh.

“The purpose of this project is to observe the decade with a greater audience, from the architecture profession to local governments,” he says. There were fewer examples of what he calls “monumental design,” submitted for inclusion in the book. “We’re seeing past the colonnades and high ceilings.”

Instead the use of glass predominated in many of these submissions. According to Alisa Kim, the project’s chief staff editor, glass buildings show “the trend of transparency, with natural light and a design that is less intimidating and is welcoming to the public.”

The courthouses included in the book were chosen by jurors from a broad cross-section of experience, including architecture and design as well as judicial administration and judicial experience.

The courthouses were evaluated for submission based seven criteria, including functionality, use of materials and light and judicial image. Chang is careful not to call this compilation a competition. Designs were selected to be representative of the trends over the decade, not because they were the “best” in any category.

The full-color book can be purchased for $40, from the NCSC.