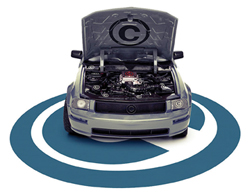 If you like to tinker with your car, you might want to consult with a copyright lawyer first. Digital rights groups are warning that all that software under the hoods of cars these days could lead to copyright violation claims against the home mechanic.

The concern has led the San Francisco-based Electronic Frontier Foundation to ask the U.S. Copyright Office to create a specific exemption for home mechanics under the Digital Millennium Copyright Act, which could otherwise be construed to prevent such home maintenance.

“That American tradition of tinkering with your vehicle in your garage is threatened by copyright law, of all things,” says EFF attorney Kit Walsh. “Let’s say you replace the cylinder. But you need to calibrate it and torque it right, or it’s not going to work. To do that, you need to change variables in the software.”

Car companies have plenty of reasons to be concerned about home mechanics mucking with code, says Dan Gage, spokesman for the Alliance of Automobile Manufacturers. “The typical car today has about 100 million lines of software coded. Your car is, in essence, a … minicomputer on wheels.” Tinkering with code under the hood could affect safety systems or fuel efficiency and emissions, he says.

Of course, garage hobbyists have always risked causing themselves trouble. “It’s certainly possible for people trying to tinker with their own property to screw it up,” Walsh says. “That is nothing new. What is new is that people who want to or have the sophistication are legally barred from doing so.”

Washington, D.C., lawyer Michael Remington of Drinker, Biddle & Reath served as longtime chief counsel of the House of Representatives intellectual property subcommittee before the enactment of the DMCA and was one of the law’s private sector negotiators. He sees the issue as “a classic exam question: Read a statute that was not drafted for this purpose, and how would you work it out?”

A ruling is expected by midyear.

This article originally appeared in March 2015 issue of the ABA Journal with this headline: “Under the Hood: Digital rights group asks U.S. Copyright Office for car-owner exemptions.”