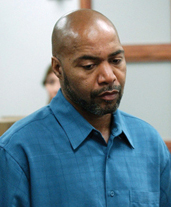 The 1977 murder of John Schweer awakened sleepy Council Bluffs, Iowa, like an icy slap in the face.

His body, with a 12-gauge shotgun wound to the chest, was found July 22, 1977, on railroad tracks near a car dealership where he worked as a night security guard. Schweer had retired just 17 days earlier as a captain with the city police de­partment. He was wearing his police uniform when his body was found.

The community overlooking the Missouri River cried out for justice.

More than 30 years later, Curtis W. McGhee Jr. and Terry J. Harrington say local prosecutors and police conspired during the investigation to frame them with lies, threats and fabricated evidence. Worse, they say, prosecutors used that same evidence to convict them of first-degree murder at trial. It cost each man a life sentence.

So they’ve taken the prosecutors and police to federal court, alleging due process violations under the Civil Rights Act of 1871, known today as 42 U.S.C. § 1983. They say prosecutors lack immunity for feeding a witness information that helped convict the pair.

The prosecutors, however, maintain that using the challenged evidence at trial immunizes them from a lawsuit, even though they helped police develop the evidence. They want the U.S. Supreme Court to draw a line shielding them throughout trial.

So it becomes the high court’s turn this month to delve once more into the doctrine of immunity for public officials accused of wrongdoing in the course of their duties. Pottawattamie County v. McGhee is scheduled for argument Nov. 4.

“I’m glad they’re taking it up,” says defendant David Richter, Pottawattamie County attorney at the time. “Maybe we can get it straightened out for the whole country.”

Richter oversaw the investigation and subsequent prosecution that landed McGhee and Harrington in prison. In 2003, the Iowa Supreme Court threw out Harring­ton’s murder conviction on other allegations of prosecutorial misconduct, a decision that ultimately also freed McGhee.

Richter had been appointed county attorney in 1976 and planned to seek a full term in 1978. So solving and successfully prosecuting the murder of a police officer was paramount.

The other former prosecutor in the federal lawsuit, Joseph Hrvol, declined to comment.

But state and federal prosecutors throughout the country are watching the case intently. The National Asso­ciation of Assistant United States Attorneys and the National District Attor­neys Association had asked for permission to file an amicus brief even before the U.S. Supreme Court accepted the case this spring.

Prosecutors argue that pub­lic policy discourages subjecting them to liability and damages because it distracts them and chills their crime-fighting efforts. Besides, pros­ecutors say, other avenues are available to deal with such misconduct, including professional discipline and even criminal charges in egregious situations.

But lawyers for McGhee and Harrington say those processes do nothing to compensate their clients for the 26 years they spent locked up. They want punitive damages too.

“The [section 1983] defendants are responsible for the natural consequences of their actions,” Davis says. “Sec­tion 1983 is meant to provide a broad remedy.”

The state court decision that freed McGhee and Harrington was a relative no-brainer: Prosecutors had not informed them about a possible alternate suspect. That violated the groundbreaking 1963 U.S. Supreme Court decision in Brady v. Maryland, which requires disclosure of evidence that may point to innocence.

McGhee and Harrington, both African-Americans from Omaha, Neb., accuse the prosecutors in their civil rights complaint of focusing on them because of their race: A jury from largely white Council Bluffs, directly across the river, would be more likely to convict them than the missing alternative suspect, who was Caucasian.

The immunity question in the federal case before the justices promises to be anything but simple. McGhee and Harrington accuse authorities of coercing the key witness against them by threatening to charge him with murder if he didn’t give them someone else and by dangling a $5,000 reward in front of him.

The witness—Kevin Hughes, a small-potatoes car thief from Omaha—first gave investigators a series of conflicting accounts and flat-out lies, involving such crucial details as the type of weapon used in the murder, what exactly occurred at the scene, and whether he even accompanied McGhee and Harrington to the scene at all.

So police and prosecutors decided to help Hughes out, according to the civil rights complaint, chiefly by editing his story to eliminate lies that could be proven false and by supplying him with details of the crime to make him sound more believable.

Section 1983 contains no immunity provision for prosecutors. So answering the question in Pottawattamie County almost certainly will require the court to reconcile conflicting case law and policy considerations.

The Supreme Court looks first to the common law when determining whether public officials are insulated from civil litigation arising from their actions in carrying out their duties.

The court first addressed the question in a section 1983 setting in 1951, and over the decades it has conferred either full or qualified immunity on a wide range of officials, including judges, legislators, governors and other executive officers, school administrators and police officers.

The question of immunity for prosecutors didn’t reach the court until 1976, when it granted full immu­nity to prosecutors engaged in presenting cases in court, which generally begins at indictment but also can include preliminary matters such as seeking search warrants. The court based its holding on the absolute immunity that covered judges under common law—and still does.

As it fleshed out the details of prosecutorial immunity, though, the court granted only qualified protection to prosecutors when they advise or assist police in their investigations. That could be particularly important in Pottawattamie County, where McGhee and Harrington say the rights violations began before authorities developed them as suspects.

Prosecutors say that’s baloney: If McGhee and Harrington weren’t suspects at the time, they couldn’t be victims of civil rights violations. If anyone has a legitimate rights complaint, the prosecutors say, it belongs to the witnesses they questioned. They say the section 1983 plaintiffs can’t use violations against others to assert their own rights.

Moreover, prosecutors contend, any sins against McGhee and Harrington were washed clean when they presented the evidence in court under absolute immunity. (Police, meanwhile, labor under only qualified immunity throughout the investigation and prosecution.)

Prosecutors hope their compartmentalized view that full immunity begins where qualified immunity ends will help them beat back decisions, by the trial court and the 8th U.S. Circuit Court of Appeals, that forced them to ask the high court to step in.

The St. Louis-based 8th Circuit decided that the law should treat prosecutors the same as police, who can be held liable for falsifying evidence used at trial. They said prosecutors can’t shed responsibility by putting on their advocate hats, walking into a courtroom and presenting to jurors the same evidence they helped invent as investigators working with the police.

“Something gets lost in the immunity doctrine,” acknowledges Chicago lawyer Jeffrey W. Sarles, who represents the county and prosecutors. “It’s just one of those compromises you have to make. There are always going to be some things that fall through the cracks. We’re talking about principles.”