Education a Concern for Silkenat 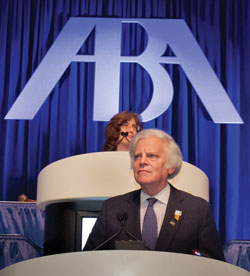 Legal education is a primary concern for the ABA’s president-elect nominee, James R. Silkenat, a matter he made clear at the 2012 ABA Midyear Meeting in New Orleans.

Speaking to the ABA House of Delegates, Silkenat said the profession is faced with several difficult issues, and legal education is one. American law schools provide the best legal education in the world, he said, but there will continue to be an evolution in how that education will be delivered.

Slated to become ABA president at the end of the 2013 annual meeting in San Francisco, Silkenat also listed several issues facing the profession, including unacceptable cuts in state court funding, the need for access to justice for all Americans, and making the ABA the national voice of the legal profession.

“The American Bar Association plays an important role in strengthening the rule of law in the United States and around the world,” Silkenat said in his speech. “I am greatly honored to be nominated for the highest position in our association and proud to be part of an American legal profession that works to promote justice and equality before the law.”

FOR THE BETTERMENT OF THE PROFESSION?

Silkenat noted that, “among the many important roles played by the ABA, and by other bar associations in the United States, is that they help us be better lawyers and judges and educators and citizens: better able to help our clients and better able to serve the public and our justice system.”

He also noted other issues of importance, including election law reform, the death penalty and public ownership of law firms.

Running as an unopposed candidate, Silkenat has known for more than a year that his selection was inevitable. But still, standing outside the room where the ABA Nominating Committee was confirming that result in executive session, Silkenat acknowledged that the final wait was cause for a good case of butterflies.

Silkenat, a New York City-based partner at Sullivan & Worcester, is a past chair of the ABA Section of International Law and the Section Officers Conference. He is secretary of the Section of Individual Rights and Responsibilities and a member of the Commission on Racial and Ethnic Diversity in the Profession.

Silkenat already knows who will follow him as president. William C. Hubbard, a partner at Nelson Mullins Riley & Scarborough in Columbia, S.C., also is running unopposed. But there is doubt about who will be the next nominees for the offices of ABA treasurer and secretary.

The two candidates for treasurer are Timothy L. Bertschy, a Peoria, Ill.-based partner at Heyl, Royster, Voelker & Allen; and G. Nicholas Casey Jr., a member of Lewis Glasser Casey & Rollins in Charleston, W.Va. The three candidates for secretary are Mary L. Smith, an attorney in the civil division of the U.S. Department of Justice in Chicago; Mary T. Torres, a member of Beall & Biehler in Albuquerque, N.M.; and Pauline A. Weaver, a sole practitioner in Fremont, Calif.