Eloquence in One Draft 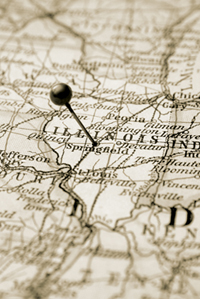 Abraham Lincoln usually went through several drafts when he prepared speeches or wrote letters for publication in newspapers.

In contrast, he produced most of his legal correspondence in one draft, and sometimes hastily. The results, however, were still effective. The many surviving letters that Lincoln sent to clients and fellow lawyers illustrate the clarity of his writing and reveal his thought process in dealing with substantive legal issues, client relations and even ethics.

Here are just a few examples:

Lincoln once used just a few humorous words to insist that a client pay his fee. He wrote George Floyd, “I have news from Ottawa, that we win our Galatine & Saline county case. As the Dutch justice said, when he married folks, ‘Now, vere ish my hundred tollars?’ ” Another fee letter supports Lincoln’s reputation for honesty. In 1851 he wrote, “Dear Sir: I have just received yours of the 16th, with check on Flagg & Savage for twenty-five dollars. You must think I am a high-priced man. You are too liberal with your money. Fif­teen dollars is enough for the job. I send you a receipt for fifteen dollars, and return to you a ten-dollar bill.”

Lincoln’s letters show that he could precisely explain the law to a client. For example, an 1858 letter to client Joseph Means says, “The statements made within are evidence of fraud on the part of the executor in selling the land. Fraud by the principles of law invalidates everything. To get rid of this sale, a bill in chancery is to be filed, charging the fraud, and then, if the fraud can be proved, the sale will be set aside. This is all that can be said. Any lawyer will know how to do it.”

There were no formal ethics rules in Lincoln’s day, but even then lawyers were alert to conflicts of interest. In one letter, Lincoln wrote, “Yours of the 12th in relation to a suit of Bakewell vs. Allin, was received a day or two ago. I well remember the transaction; but as Bakewell will need no lawyer but you, and as there is likely to be some feeling, and both parties are old friends of mine, I prefer if I can, to keep out of the case.”

Even Lincoln’s kindheartedness is reflected in his legal correspondence. He admits in an 1852 letter to another lawyer, “At our Court, just past; I could have got a judgment against Teirley, if I had pressed to the utmost; but I am really sorry for him—poor and a cripple as he is. He begged time to try to find evidence to prove that the deceased on his death bed, ordered the note to be given up to him or destroyed. I do not suppose he will get any such evidence, but I allowed him till next court to try.”

Politics were always on Lincoln’s mind. He practiced law to put bread on the family table, but also to finance some time spent canvassing—a quaint 19th century word for soliciting votes. In one letter from 1855, he frankly confessed to neglecting legal work because of politics. He wrote, “Gentlemen: Yours of the 5th is received; as also was that of 15th Dec. Last, inclosing bond of Clift to Pray. When I received the bond, I was dabbling in politics; and, of course, neglecting business. Having since been beaten out, I have gone to work again.”

A Docket That Reflects Then and Now

The Common Touch at Trial

Training Ground for the Presidency

More Than Just a Bill of Lading

Journal of Illinois History. Contact him at .(JavaScript must be enabled to view this email address).