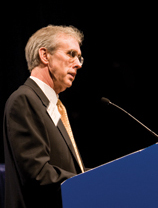 Despite its many rewards, the prac­tice of law can take a heavy toll on the people who make it a profession.

That harsh reality was at the forefront of a sometimes wrenching debate in the ABA House of Delegates during the midyear meeting in Los Angeles that ended Feb. 11. The House debate culminated in a vote adopting a model admissions rule aimed at encouraging law school graduates to find help for substance abuse and mental health issues without fear that treatment will be revealed to clients or block their entry into practice.

In essence, the Model Rule on Con­ditional Admission to Practice Law would allow recent law school graduates who have expe­ri­enced chem­ical dependency or mental health illness to be admitted to practice on a conditional basis if they have gone through rehabilitation for their problems but admissions authorities deem them otherwise eligible to practice. Applicants may be required to comply with conditions for continued treatment and monitor­ing to assure that they do not engage in behavior that renders them unfit. Monitoring may continue for up to five years, and the conditional admission order would be confidential.

Without a conditional admission rule, bar applicants would be tempted to hide their dependency or mental health problems out of fear that they would be rejected, and they would be less likely to seek treatment, said Robert L. Childers, a Tennessee Circuit Court judge in Memphis who presented the rec­ommendation. Childers is chair of the ABA Commission on Lawyer Assistance Programs, the lead sponsor of the measure.

The House adopted the model admissions rule in a voice vote.

The rule builds on the experience of 19 states (and Puerto Rico) that already have conditional admission provisions in place, Childers said.

He said another four states have been awaiting ABA action on the model rule before considering adoption of their own rules that would use it as a reference point.

Childers gave a litany of statistics—including rates of suicide, depression and substance abuse among lawyers that outpace those in the general population—to bol­ster the argument for early inter­vention among lawyers and law students. He cited one study that estimated some 40 percent of law students experience depression by the time they finish school.

Other proponents of the measure echoed Childers’ argument that conditional admission offers a path for helping law students address those problems while still in school.

“If we believe in the pos­sibility of redemption and the chance that someone can get better, then this rule gives us the way to get there,” said ABA Treasurer-elect Alice E. Richmond of Boston, who has been a bar examiner in Massachusetts since 1983.

But opponents of the measure said the interest in assisting lawyers with dependency and mental health problems should not under­cut the legal profession’s commitment to clients.

They expressed concern that the model admissions rule would allow lawyers to represent clients even though they might later prove to be unfit to practice. Just as im­portant, opponents claimed, the rule would not require that the status of conditionally admitted lawyers be disclosed to those clients or potential clients.

Referring to law school grads seeking conditional admission, James F. Williams, a delegate for the Wash­ing­ton State Bar Asso­ciation and a partner at Seattle’s Perkins Coie, asked, “Why do we have to pro­tect them, and who are we protecting them from?” Under the principles of the legal pro­fes­sion, “the pub­lic interest pre­dominates,” Williams added.

“Well, what do we do when it’s a family member?” said Michael S. Greco, an ABA past president and partner in the Boston office of Kirkpatrick and Lockhart Preston Gates Ellis.

“If we don’t give law students an avenue to treatment, they will enter the profession and be ticking time bombs. Is that in the interest of the public? Is that for the good of the lawyer? The answer, of course, is no.”