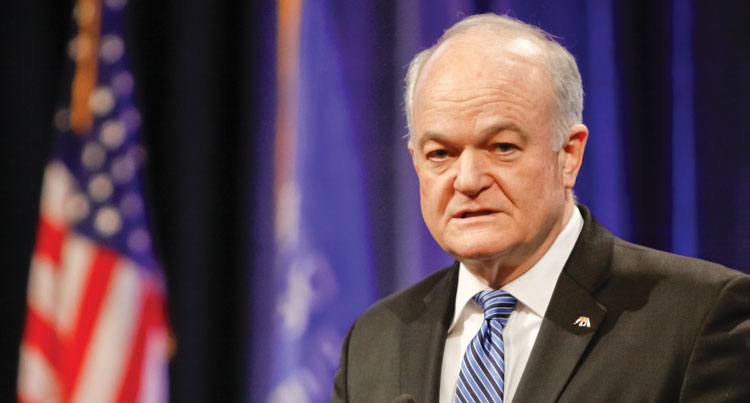 Quoting Dr. Martin Luther King Jr., ABA Executive Director Jack Rives told the ABA’s policymaking body that “this is no time to … take the tranquilizing drug of gradualism.” He called on ABA leadership to take action to increase lawyer members.

Rives’ call to action on a new membership model came after a stark presentation of the ABA’s continuous market share decline.

Speaking to the House of Delegates at the ABA Midyear Meeting, Rives said the ABA’s membership currently stands at 412,499 members, 70 percent of whom are lawyers. Another 26 percent are students, and 4 percent—including paralegals and international lawyers—are associates.

To reverse the decline, ABA leadership, staff and marketing consultants are working on a new membership model that is on a trajectory to be presented to the House during the annual meeting in Chicago.

The model would reduce the dues categories to three. Bundled benefits would include two sections, access to a CLE library and access to content that will be organized behind a members-only paywall.

Rives said the changes, which will require an investment in products and resources, are necessary for the ABA to remain a robust professional association and maintain its status as the voice of the legal profession.

Behnke said she agreed with the adage that you can’t cut your way to a healthy organization but cautioned that the ABA also can’t ignore the reality of the expense and revenue picture.

While she praised the work of the ABA throughout the United States and the world, Behnke said the revenue decline must reverse for the ABA to be able to conduct its mission work.

ABA President Hilarie Bass urged House leaders to make tough decisions when they’re asked to do so, likely at the August annual meeting when the ABA celebrates 140 years. During her travels in her first six months in office, Bass said, she has become aware of the ABA’s power to effect change.

She’s also been made keenly aware that the ABA’s “power can only be as strong as our organization itself.”

She said the House, which sets policy for the ABA, has to “recognize that the association needs to evolve and adapt to the changing needs of the profession and its lawyers.”

Bass urged that when delegates are presented with proposed changes, they shouldn’t nitpick and take the recommendations personally. The changes must be made for the ABA to maintain the power to do its work, she said.

After the midyear meeting ended, Rives announced a buyout plan for veteran ABA employees. The Voluntary Separation Incentive Program is being offered because “decisions on reorganization and staff restructuring will be necessary in the near future,” Rives said in a staffwide announcement.

In a town hall meeting, Rives said he’s proposing a restructuring to center around the four goals of the association: to serve members, improve the profession, eliminate bias and enhance diversity, and advance the rule of law. The reorganization plans are expected to be announced this month, he said.