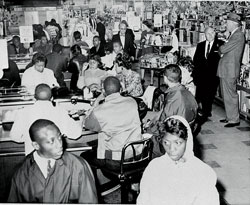 On the afternoon of Feb. 1, 1960, four students from the North Carolina Agricultural and Technical College walked into the F.W. Woolworth store in downtown Greensboro. After purchasing some personal items, they settled down at the store’s lunch counter and tried to order. Because the students were black, the staff refused to serve them.

One of the students, Ezell Blair Jr., politely pointed out that the store had already sold them the personal items, but lunch counter staff stood their ground. The four students, three of them graduates of a local segregated high school, remained until closing and quietly vowed to return the next day.

Sit-ins had been a key tactic in the civil rights struggle for decades, but their success was a matter of timing. And although similar sit-ins had already been staged in Nashville on a test basis, something about the Greensboro demonstration began to attract national attention.

The four students returned the next day with 25 others, and by day five of the sit-in more than 300 supporters—some of them white—appeared at the store, taking turns occupying the 65 lunch counter seats. Though Greensboro was considered a “moderate” Southern city, tensions between whites and blacks there grew palpable, stirred in part by gangs of white youths who gathered at the dime store, slinging insults—and worse—at the student protestors. And the contrast between the orderly, disciplined students and their unruly white tormentors was not lost on journalists covering the lunch counter face-off. As support for the Greensboro protest spread north, sit-ins and “sit-downs” began spreading quickly through the South. By year’s end more than 100 such protests had been staged throughout the states of the old Confederacy.

In Greensboro, a brief moratorium failed to bring resolution. When the students returned, store management shut down the lunch counter. But losses from a nationwide boycott proved too great to justify. Less than six months after the original protest, Woolworth’s relented and opened its lunch counters to paying customers of any race.