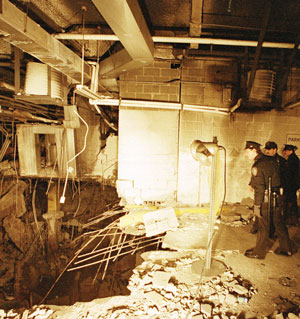 Long before they became a symbol of national grief and anger, the twin towers of the World Trade Center in south Manhattan were tourist landmarks in New York City's skyline—the most conspicuous two buildings of seven that composed a colossal hive of capitalism dwarfing the surrounding neighborhood.

So it was little noticed when, on a Friday in February 1993, two men pulled into the center’s underground garage in a rented Ford Econoline. They parked the van, lit a 20-foot fuse and walked out of the garage. When the 1,300-pound bomb erupted a few minutes later, it left a crater more than six stories deep in the north tower of the complex, gutting the lobby of the Vista Hotel and sending an acrid plume through 46 floors of the 110-floor building. Six died and more than 1,000 were injured, many in the mayhem of an uncoordinated escape.

One of the two men was Ramzi Yousef, a well-trained and well-traveled terrorist who specialized in explosives. Yousef had arrived in New York in September on a flight from Pakistan, carrying an Iraqi passport and claiming to have been born in Kuwait. He had no visa but was allowed to enter the U.S. after he requested political asylum.

Shortly after arriving, Yousef pulled together a small cadre of like-minded Middle Eastern immigrants, several of them followers of Sheikh Omar Abdel-Rahman, a radical Muslim cleric from Egypt who openly espoused violence against Westerners from his mosque in New Jersey.

Working from two apartments and a storage unit in nearby Jersey City, Yousef’s band of jihadists began to gather the chemical and mechanical elements of a homemade bomb. They masked their purchases through Nidal Ayyad, a local chemical engineer, and it took two months to procure enough chemicals to create the volatile urea-nitrate device.

Within hours of the blast, Yousef fled to Pakistan. Mahmud Abouhalima, who had helped with logistics, fled to Saudi Arabia. But arrests began within a week when conspirator Mohammed Salameh requested a refund for renting the van. His arrest led to the storage unit, the apartments and the subsequent arrests of Ayyad and Abdul Rahman Yasin. Abouhalima was tracked to Egypt, where he was arrested and extradited to the United States.

Though the bombing was a clear act of terrorism, the conspiracy was treated as a criminal investigation. On March 17, a federal grand jury indicted Ayyad and Salameh. On March 31, Yousef and Abouhalima were added. And as the reach and depth of the conspiracy began to emerge, investigators added new plots and plotters who spanned the globe. By the time Yousef was arrested in Pakistan in February 1995, four of the conspirators had been convicted, Abdel-Rahman and his acolytes had been indicted, and Yousef had been implicated in another spectacular plot in the Philippines to bomb as many as 11 American airliners simultaneously.

Through three different trials resulting in three separate convictions and life in prison for his far-flung conspiracies, Yousef remained unrepentant. He confided to investigators that his bomb had failed to do what it was designed to do: topple one tower into the other, bringing both down. When it was pointed out that the World Trade Center was still standing, Yousef is said to have remarked: “It wouldn’t be, if we had had more money.”