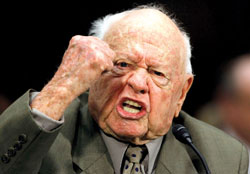 When President Barack Obama signed the Elder Justice Act into law as part of last year’s health care reform package, the ABA and other advocates for the elderly celebrated the fact that elder abuse was being recognized as a national priority.

The act provides for coordination of efforts by federal, state and local government bodies, along with private entities, to prevent, detect and redress elder abuse, neglect and exploitation. The act authorizes federal funding for adult protective services in each state, demonstration projects, forensic centers and training for long-term care providers.

But passage of the Elder Justice Act is only a partial solution to the problem. First, no funding has been appropriated for the activities authorized by the act. And second, no federal law adequately recognizes and supports the important role the justice system plays in addressing a problem that causes serious physical, psychological and financial harm to millions of elderly people each year.

The ABA is urging Congress to enact the Elder Abuse Victims Act, which was reintroduced this year by Sen. Herbert H. Kohl, D-Wis., who chairs the Senate Special Committee on Aging.

The bill (S. 462) would authorize grants for specialized training about elder abuse for all components of the justice system. The measure also would support creation of specially designated elder justice positions in local prosecutors’ offices and courts, and provide other support for state prosecutors, attorneys general and Medicaid fraud control units handling elder justice issues. The bill calls for creation of an office of elder justice within the Justice Department.

In March, Kohl convened a committee hearing that focused on elder abuse and highlighted a Government Accountability Office report that urges a greater federal role in addressing the issue.

The hearing also featured poignant testimony by 90-year-old film legend Mickey Rooney, who testified about his own financial abuse by family members. “When that happens,” he said, “you feel scared, disappointed, angry—and you can’t believe this is happening to you.”

But elder abuse victims also can feel conflicted, he said. “Because you love your family and for other reasons, you might feel hesitant to come forward.”

Rooney said obtaining a lawyer—“someone who has your personal interest at heart and feels what you have been through”—can help seniors protect themselves, but many elder abuse victims don’t have access to funds to pay for a lawyer.

The ABA has been addressing elder abuse issues for nearly two decades, largely through its Commission on Law and Aging. In a letter sent to Kohl and ranking Republican committee member Sen. Bob Corker Jr., R-Tenn., ABA Governmental Affairs Office Director Thomas M. Susman noted that the House of Delegates adopted policy in 2002 supporting efforts by government bodies and the justice system to respond more effectively to “elder abuse, neglect and exploitation.”

But, he said, “there are very limited resources available to those who provide civil legal services or victim services to elder abuse victims, or for the investigation and prosecution of perpetrators.” Calling for additional federal legislation and funding, Susman’s letter states that “a coordinated and comprehensive response is critically needed to improve the quality of justice for elder abuse victims.”

This column is written by the ABA Governmental Afffairs Office and discusses advocacy efforts by the ABA relating to issues being addressed by Congress and the executive branch of the federal government.