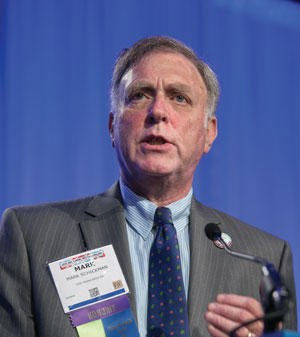 Addressing the hot-button issue of sexual violence, the ABA’s House of Delegates passed three resolutions sponsored by the Commission on Domestic and Sexual Violence during the ABA Annual Meeting in August.

Resolution 109A urges colleges and universities to recognize a right to an education free of domestic and sexual violence, stalking-related violence and partner- and gender-based violence; to adopt and enforce policies that protect victims; to train students and employees on the subject; and to collaborate with outside support groups and criminal justice systems.

It also asks higher education institutions to protect the privacy of victims and reject mandated reporter requirements for students and employees. And it urges Congress to fund education on related laws, and all governments to adopt remedies and enforcement to fight these types of violence.

Jaime Hawk, an assistant federal defender with the Federal Defenders of Eastern Washington and Idaho, moved the resolution. The only other speaker was Stephen Saltzburg of the ABA Criminal Justice Section. Saltzburg, a professor at George Washington University Law School, spoke in favor of the resolution but wanted to emphasize the inclusion of due process for both the accused and the accusers.

That has been a point of criticism in the past for schools, with both sides arguing that campus-based hearings lack the protections of a court of law. The Criminal Justice Section specifically asked to include language “assuring that the rights of those accused of such acts are recognized, respected and protected,” Saltzburg said. That language was added, and the resolution was adopted as revised.

Resolution 109B urges governments to extend civil protection order statutes on partner, sexual, stalking and dating violence to lesbian, gay, bisexual and transgender individuals. And in resolution 109C, the House agreed that freedom from domestic, dating and sexual violence, as well as stalking and gender-based violence, is a fundamental human right.

Mark Schickman, an attorney with Freeland Cooper & Foreman in San Francisco, noted that sexual violence has been ingrained in our culture for centuries.

“This is another tool in the arsenal to get another remedy and to get an argument out [against] the most pervasive harm we know,” said Schickman.

• Passed—over some opposition—Resolution 102 (PDF), urging lawyer licensing entities to focus on behavior rather than diagnoses when asking about mental health. The U.S. Department of Justice has sent letters to three states advising them that their questions to bar applicants about mental health diagnoses violate the Americans with Disabilities Act. Opponents had argued to retain previous ABA policy on the issue.

• Passed Resolution 113 (PDF) that, among other issues for Native Americans, urges that tribal governments be permitted to try any person committing a crime against a child in Indian territory.

• Urged Congress to restore federal Pell Grant eligibility for prisoners with qualifying needs. Resolution 108B (PDF) would expand on the Second Chance Pell Pilot, a U.S. Department of Education pilot program intended to see whether improved access to the grants, which provide need-based aid for undergraduate students, reduces recidivism and increases employment rates for former prisoners.

The House also heard a plea from Legal Services Corp. Board Chairman John G. Levi for continued ABA support. Levi noted the number of Americans with incomes that qualify for help has grown from 12 percent to 22 percent. Yet the LSC’s congressional funding is substantially lower in inflation-adjusted dollars, he said, and the budget that was passed this year by the House of Representatives would cut it further.

This article originally appeared in the October 2015 issue of the ABA Journal with this headline: “Fighting Sexual Violence: ABA House urges extending protections to all.”