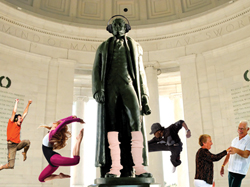 There are many ways to celebrate Thomas Jefferson’s April 13 birthday: a visit to the nation’s capital; a reading of the Declaration of Independence; cupcakes, perhaps.

But just don’t try to dance at the Jefferson Memorial. Wash­ington, D.C., libertarian Brooke Oberwetter learned that lesson the hard way last year when, shortly before midnight on the eve of Jefferson’s B-day, she and a group of fellow libertarians gathered to honor the birth and spirit of the first champion of the First Amendment—with a silent dance party inside the Jefferson Memorial.

Oberwetter and some 20 others gathered at the memorial, some donning iPods, and busted a move. “It was supposed to be a weird, quirky cele­bration,” says the 28-year-old Oberwetter, a new-media consultant. Instead, it turned into a “really bad night.”

Just after the dance party got under way, the U.S. Park Police asked the silent revelers to leave the premises. News reports say the police then began to push the dancers out of the memorial. Oberwetter, who had been dancing silently to It Takes Two, in­stead questioned the order to leave. When the officers did not respond with an answer—only continued to insist that she leave—Oberwetter says she was pushed up against one of the memorial’s stone pillars, handcuffed and led away, according to public accounts of her arrest.

A video capturing the event was posted on YouTube. 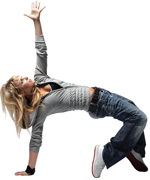 Oberwetter eventually was cited for “interfering with an agency function” and “demonstrating without a permit.”

In March, Oberwetter sued the arresting officer and Ken Salazar, secretary of the U.S. Department of Interior, which oversees the Park Police. The suit charges them with violations of her civil rights, including unreasonable seizure, and her First Amendment rights of free speech and assembly.

Representing Oberwetter is lit­igator Alan Gura of Alexandria, Va. “We live under the rule of law, not the rule of police. Thomas Jefferson understood that this sort of authoritarianism must be resisted,” says Gura, who recently won the landmark decision in District of Columbia v. Heller before the U.S. Supreme Court.

Federal regulations govern conduct at certain memorials. A spokes­man for the U.S. Park Police declined to comment on Ober­wet­ter’s case because the litigation is pending. But last year, a Park Police spokesman told the Washington Post that the chamber is a restricted area that limits demonstrations or distracting activity “to preserve a spirit of tranquility and reverence.”

In her complaint, Oberwetter stated that her “expressive conduct” did not draw a crowd, and that there were very few visitors to the memorial at the time.

“It was not the worst police abuse ever,” Oberwetter said. “But I feel strongly that the Park Police should be held accountable for abusing their authority.”